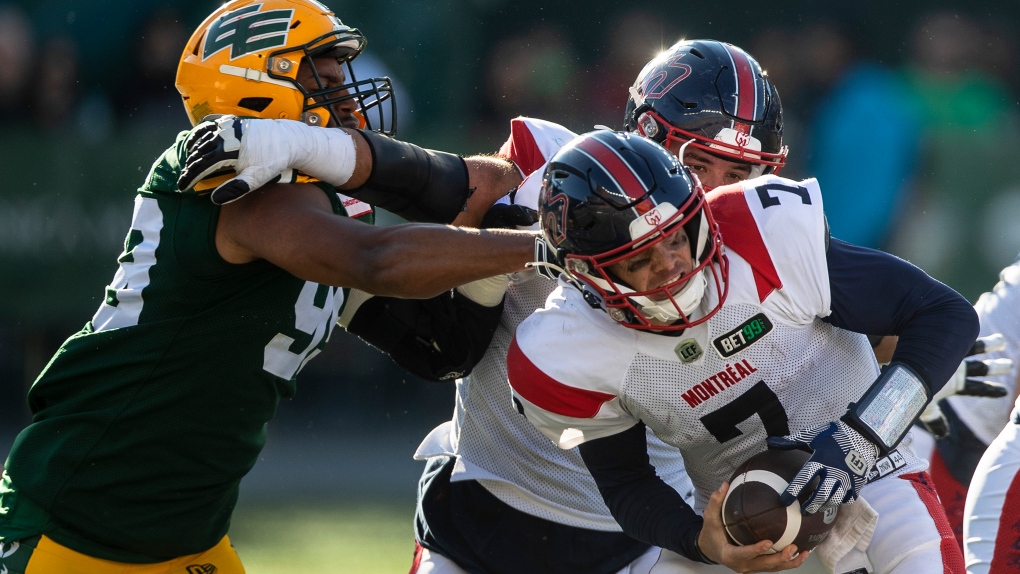 It was one heck of a first career interception for Tyrice Beverette.

The Montreal linebacker's 100-yard interception return turned the tide as the Alouettes kept their hopes of making a run at top spot in the CFL's East Division alive with a thrilling 25-18 victory over the hapless-at-home Edmonton Elks on Saturday.

“I honestly didn't know it was 100 yards. My legs felt like it was 100, but I didn't know,” Beverette said. “It took me a little while to catch my breath, but it was a great play. It felt good to be able to come up with that big stop at that key moment.”

The Alouettes won their third consecutive game and fifth of their last six and improved to 7-7, at least temporarily two points back of Toronto. It's a major improvement from where they were earlier in the campaign.

“I never thought .500 could feel this good,” said Alouettes head coach Danny Maciocia. “When you start 2-6, to be sitting at .500 feels pretty damn good. It feels like we haven't lost in a while. It is a credit to these guys because it was bleak not too long ago. But they kept plugging away.”

Edmonton established a CFL record for most consecutive home losses at 15, having failed to win at Commonwealth Stadium since Oct. 12, 2019.

“I ain't talking about that streak,” said Elks head coach Chris Jones. “So, next question.”

“This one hurts a little bit,” said Edmonton defensive lineman Jake Ceresna. “It's devastating. I think we were in a position to win the game and then just a couple of costly mistakes here and there.”

The Elks got on the board first off their initial possession with a 26-yard Sergio Castillo field goal.

The Alouettes responded quickly with a one-yard plunge into the end zone from backup QB Dominique Davis.

After the Elks got a punt single, Montreal extended its lead when Eugene Lewis reeled in an eight-yard pass with a nifty one-arm catch on a pass from quarterback Trevor Harris three minutes into the second quarter.

The Elks caught a break as Ceresna forced a fumble recovered by Matthew Thomas on the Montreal 32 with a minute left in the second frame, leading to a one-yard quarterback keeper by Taylor Cornelius. They got another single off the ensuing long kickoff.

Montreal cut the Edmonton lead to 18-17 lead at the half with a last-second 52-yard field goal from David Cote.

After a scoreless third, Edmonton looked poised to add to its lead deep in Montreal territory when Adarius Pickett batted down a Cornelius passing attempt into the waiting arms of Beverette, who would take it 100 yards for the touchdown. Montreal would add a two-point convert to move back ahead 25-18.

The Elks marched all the way back down field on their next possession but failed on a third-down gamble and turned the ball over on the Montreal two-yard-line.

Edmonton had another glorious chance with a minute left on the Montreal 28, but a Cornelius pass went in and out of the hands of Danny Vandervoort and into the waiting arms of defender Michah Awe.

Edmonton failed to score a point in the second half despite three trips to the red zone.

“That was one of the more unfortunate losses and how it happened that I have ever been a part of,” Cornelius said. “Two drives back-to-back, not getting in the end zone. One ended up in a pick-six and the other one a turnover on downs.”

The Elks are back in action next Saturday in Winnipeg against the Blue Bombers while the Alouettes next play host to Ottawa on Monday, Oct. 10.

NOTES: The two teams last met on July 14 in Montreal when the Elks pulled off a huge come-from-behind 32-31 victory. | The Elks had some good news in the returns from injury of SB Kenny Lawler (ankle) and DT Ceresna (calf). | Montreal running back William Stanback has returned to practice, but was not ready in time for Saturday's game. | It was Montreal's first road game in 51 days, coming off the longest homestand in club history.

This report by The Canadian Press was first published Oct. 1, 2022.

The Winnipeg Police Service believes the remains of two victims of an alleged serial killer are in a landfill north of the city, but says the recovery of their bodies is likely impossible.

Democratic Sen. Raphael Warnock defeated Republican challenger Herschel Walker in a Georgia runoff election Tuesday, ensuring Democrats an outright majority in the Senate for the rest of U.S. President Joe Biden's term and helping cap an underwhelming midterm cycle for the GOP in the last major vote of the year.

Having a poor turnout for a book signing is something every author dreads, but after debut author Chelsea Banning tweeted her disappointment after an event, the literary community came together to share countless stories of their own event disappointments to uplift one another.

'Bring them back!': Calls to bring Canadians home from Syria come from inside and outside of court

'Bring them back!' activists yell at lawyers as they walk into the Federal Court in Ottawa, where a judge will decide whether or not to order the Canadian government to repatriate more than 40 Canadians imprisoned in northeast Syria.

What is the 'white elephant' gift exchange?

With the holiday season in full swing, families and friends looking for a more unconventional way to give gifts can look no further than to the 'white elephant' gift exchange, but what is it exactly?

In the 73 minutes on Tuesday afternoon that it took for Prime Minister Justin Trudeau and five other dignitaries to officially open the 15th global talks to save nature from human destruction, statistics suggest another 4,000 hectares of forest around the world was lost to that same force.