Alta. COVID-19 hospitalizations below 400 for first time since November 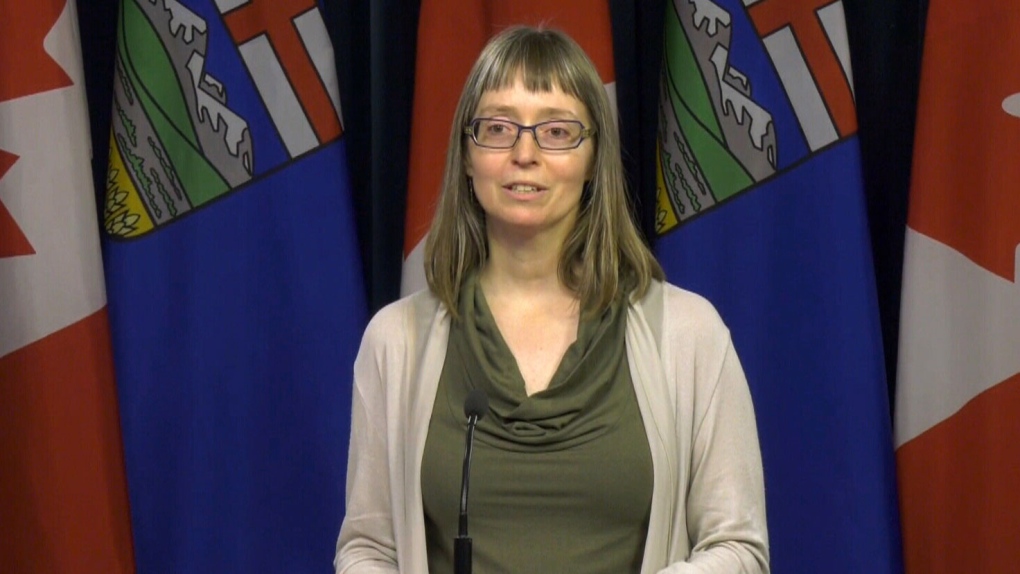 EDMONTON -- For the first time in months, there are fewer than 400 Albertans in hospital with COVID-19.

As of Thursday, there were 397 COVID-19 patients in hospitals across the province. Of those, 71 are in ICU.

"Our numbers continue to decline, but there are still as many people in hospital today as there were on Nov. 23," Chief Medical Officer of Health Dr. Deena Hinshaw reminded the public.

It's also not so few cases that the province is guaranteed to have a quick transition to the second stage of its relaunch plan, which, at the soonest, could begin March 1 if hospitalizations remain below 450 and other metrics like positivity and transmission rates continue to trend downward.

The phases of Alberta's relaunch plan are separated by three weeks so that officials can tell what effect recently opened activities have on COVID-19 spread.

"If our case counts start to plateau or begin to rise again, our hospitalizations will take several weeks before their trend starts to change," she said.

"While we have already reached that... below-450 mark that's required to move to Step 2, that's only one part of the requirements."

Both she and Premier Jason Kenney were asked on Thursday about easing restrictions on a regional basis. Both said cases remain too high.

"I know that there is keen interest in a more regional approach, and yet when we look at our numbers, we see that every health zone is still over that limit of 50 cases per 100,000 that we had been using in the summer and fall to navigate our relaunch," Hinshaw said. "So while some zones may have less cases than others, all zones continue to have a level of cases that continues to be concerning."

Speaking at a news conference earlier in the day, Kenney said, "We've always said that we are open to taking COVID policy on a regional basis, and in fact we have at various points during the pandemic done just that.

"The problem is this: that the level of spread across the province since October was so high that we could not responsibly have a different approach in different regions. And in fact right now, we've seen the rate of transmission, the positivity rate, hospitalizations, and new cases growing in the south central and northern zones, but going down in Edmonton and Calgary."

Alberta's number of COVID-19 variant cases has grown to 156 with 36 new B.1.1.7 variants confirmed since Wednesday.

The day-over-day increase is the largest seen in 24 hours, but the top doctor reminded Albertans of the time it takes to transport a positive COVID-19 sample from the local lab it was found in to the lab that screens for mutations. Some of the new confirmations were positive tests that date back to the first week of February.

"Many of those are the cases that we have found when we've been doing our intensive follow up of cases, double testing close contacts... and then put in place the boundaries around those."

​Hinshaw also announced on Thursday 16 more COVID-19-related deaths, as well as 351 new cases among some 10,000 tests conducted the day before. The province has a positivity rate of 3.5 per cent.

Alberta has administered 135,000 vaccine doses, including two shots each to 42,000 Albertans who have been fully immunized.

Hinshaw said her department does not yet have a plan for the next stage of vaccine rollout finalized, despite the fact more product will soon be on its way from both Pfizer and Moderna.

"The importance of taking time to make sure that all of the different aspects of sequencing and the options are considered has been causing the length of time that has been taken on this, but I anticipate that there will be some decisions made within the coming weeks."

Earlier that day, Manitoba Premier Brian Pallister announced he had signed a deal to secure the province two million doses of vaccine produced by Calgary-based Providence Therapeutics if it is approved by Health Canada.

Hinshaw declined to comment, noting her role does not consist of procuring vaccine product, but Kenney said he, too, had spoken with Providence about its production needs.

He said the company needs to see a $150-million order for 50 million doses before it'd be able to build a production facility.

"I said, 'Count us as being very interested,'" Kenney recalled to reporters, noting there was much work to do with his counterparts across the province before anything moved forward.

"Neither Manitoba alone with two million, or Alberta with a few million more, would have an adequate market to satisfy the minimum requirements," he said.

"Of course we need domestic production, so the bottom line is we are absolutely open – more than open. We are pursuing domestic production and potential supply because we apparently cannot count reliably on the federal program to produce doses from around the world."

At that point, all air travellers coming from outside of Canada will need to follow testing requirements laid out by Ottawa and quarantine for 14 days in a hotel room provided by the federal government.

Hinshaw said Alberta's labs were "well positioned" to switch between the programs.

The rapid testing pilot will remain in place at Alberta's Coutts border crossing, where motorists coming from the United States will need to provide proof of a negative PCR test done in the previous 72 hours.

Since the pilot was launched in November, the program saw more than 49,000 people tested as soon as they arrived in the province.