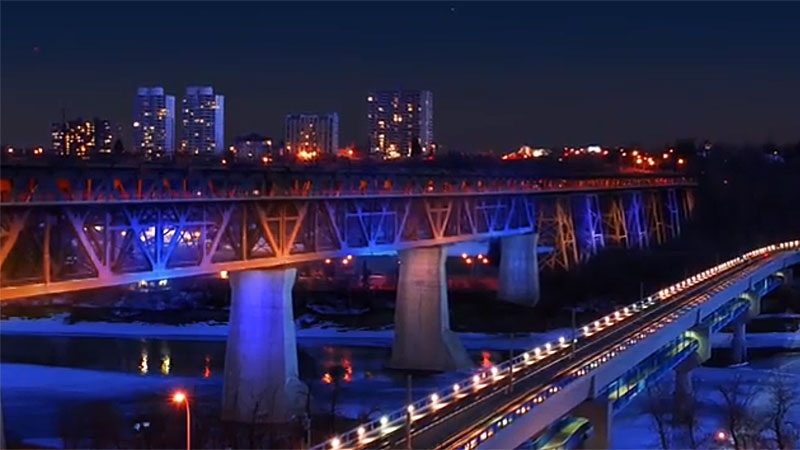 EDMONTON -- The City of Edmonton is being sued after it cancelled a scheduled lighting of the High Level Bridge that was to be illuminated in colours chosen by an Alberta anti-abortion group.

The lawsuit was filed in Edmonton on Oct. 4 on behalf of the Alberta March for Life Association and its vice chair Jerry Pasternak.

According to court documents, Pasternak filled out an application on March 6 for the city's Light the Bridge campaign to have the High Level lit up on May 9 to recognize the association's annual March for Life.

The city-run program accepts applications from not-for-profit and community-focused groups to light up the crossing in their colours.

The next day, the City approved the application and the bridge was to be lit up in pink, blue and white in recognition of the AMLA.

A month before the scheduled display, city staff cancelled the display via an email.

"Upon further review of your application, it came to our attention that lighting the bridge for this event can not be approved due to the polarizing nature of the subject matter," the email read, according to the lawsuit.

The email also noted the city cancelled a similar request from the AMLA in 2017.

Pasternak wrote back asking staff to justify the cancellation but did not get a response.

The Justice Centre argues that constitution forbids the City from discriminating against the group. The lawsuit asks the city to administer the bridge "in a fair and equal manner without political or ideological favouritism."

Mayor Don Iveson declined to comment on the lawsuit when asked by reporters today.

"I understand the matter is before the courts now and so it’s really for the judicial process to unfold and we’ll see what the results of that are," Iveson said.

"I really can't comment any further until that's resolved."

The city's website on Light the Bridge reads, "The City reserves the right to deny requests that do not merit public support or are mainly personal, private, political, polarizing or commercial in nature."