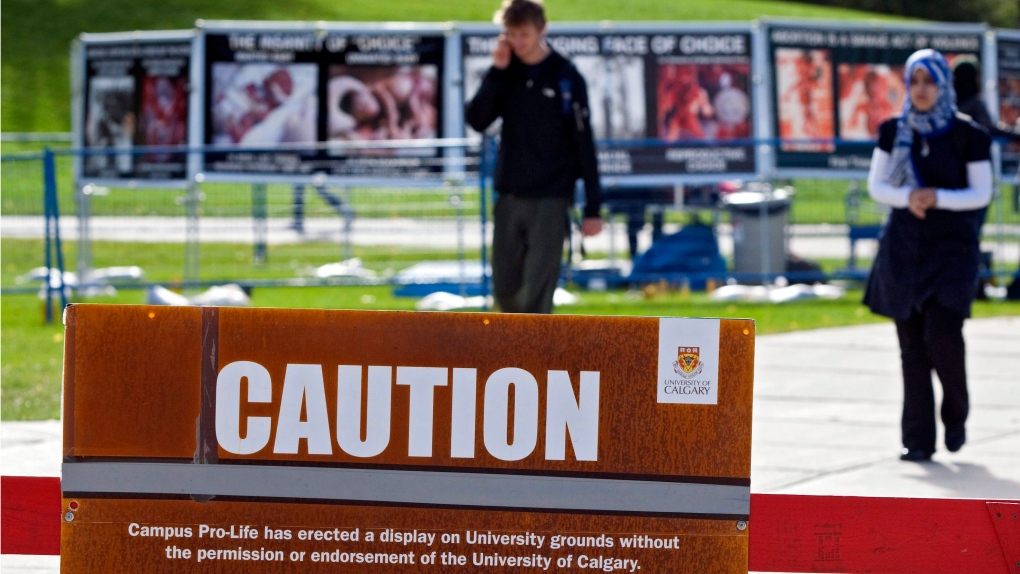 A sign warns pedestrians of a pro-life display erected by members of the Campus Pro-Life student group on the University of Calgary campus in Calgary, Monday, Sept. 27, 2010. (Jeff McIntosh/THE CANADIAN PRESS)

EDMONTON -- A campus group that staged an anti-abortion protest at the University of Alberta that led to a counter-demonstration has lost an appeal over how the school handled the event, but won a second appeal about security costs.

UAlberta Pro-Life sought a judicial review of the university's decision not to investigate the group's complaint that counter-demonstrators should have been disciplined in 2015 for blocking its displays, which included pictures of dismembered fetuses.

The group also wanted a review of the university's decision that the group would have to pay $17,500 to cover security costs for a similar protest it wanted to hold in 2016.

The Justice Centre for Constitutional Freedoms, which represented UAlberta Pro-Life, wanted the court to rule that charging a security fee infringed on freedom of expression.

Both applications had been previously dismissed by Court of Queen's Bench.

In a 2-1 decision, Alberta's Court of Appeal agreed that the challenge over the complaint decision should be dismissed, but the security costs appeal should be allowed.

This report by the Canadian Press was first published Jan. 6, 2020