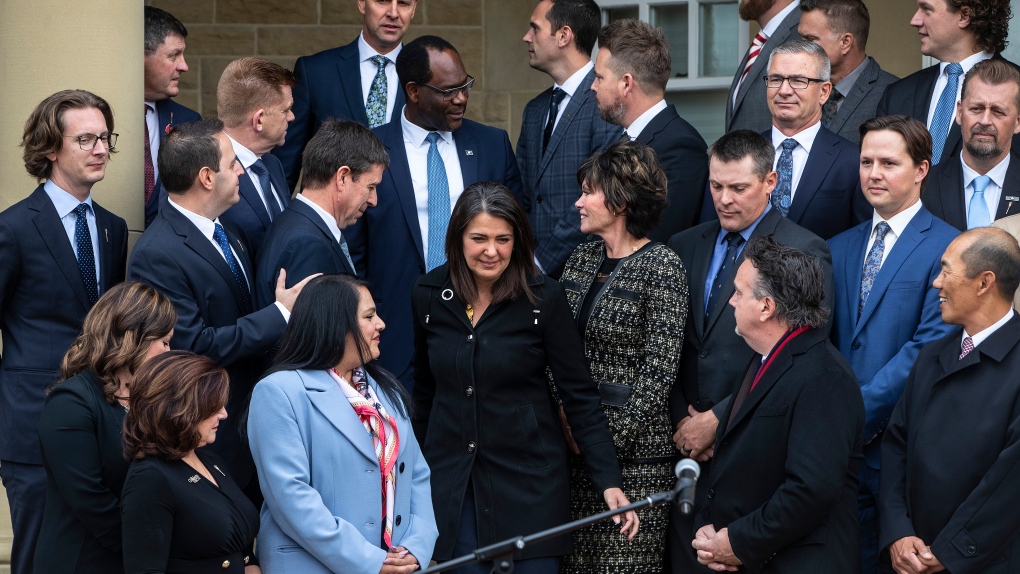 Alberta Premier Danielle Smith makes her way to a press conference through her new cabinet after members were sworn into cabinet in Edmonton, on Monday, October 24, 2022 (The Canadian Press/Jason Franson).

From reducing electricity transmission charges for homeowners to exploring a provincial pension plan and improving campgrounds, Alberta's premier has presented cabinet with their marching orders.

Over the past two weeks, Premier Danielle Smith has released 18 mandate letters to her cabinet ministers to focus their efforts for the next seven months before the scheduled provincial election.

Here are some highlights from those documents.

As of publication, the mandate letters for the ministers of health, mental health and addictions, Indigenous relations, infrastructure, and advanced education have yet to be released.

Reducing the cost of utility payments in Alberta is one of the top priorities Smith directed the minister of affordability to explore.

That mandate includes reviewing regulated rates for electricity and natural gas to "best serve Albertans" and looking at ways to lower transmission and distribution costs.

The finance minister was also told to collaborate on those efforts and prepare an additional "package of inflation relief measures" to help Albertans navigate the affordability crisis.

Alberta's forestry and parks minister has been directed to find ways to develop more campgrounds and recreation opportunities on provincial land.

The premier said any plans for park expansion or creation have to be "environmentally responsible."

Additionally, Smith tasked the minister with investing in current campgrounds and trail systems to ensure they are "high quality" and have low costs for Albertans.

Smith also wants any fees Albertans or tourists pay while visiting national parks in the province to remain here to improve their amenities.

The finance minister was given the mandate to provide recommendations to the premier on potentially implementing a provincial pension.

Smith also wants the minister to review how the province could create an Alberta Revenue Agency to collect provincial taxes and personal income tax.

Smith tasked the pair of cabinet ministers also to explore private sector interest in developing a province-wide network of hydrogen and electric vehicle stations, including at commercial rest stops.

The province's education minister has been told to find ways to address "transportation cost pressures" and "ride times" for school boards and families.

There are fewer buses to ferry kids to school and home every day, school bus industry advocates say, leading to a growing number of children getting to class late or missing out on it entirely.

The public safety minister is to find ways to fund and more effectively deploy search-and-rescue dive teams in Alberta.

Alberta has one volunteer underwater search team that responds to drownings. Since 2013, Underwater Search Team has operated as a registered non-profit and collaborates with Alberta RCMP.

Alberta is one of two Canadian provinces without its own Mounties dive team.

While Alberta's harvest was completed ahead of schedule and some crops yielded above five-year average qualities, the rising cost of doing business ate into farmers' profits, farmers say.

Smith has directed the agriculture minister to increase nitrogen production in Alberta to help reduce costs and improve the availability of fertilizer for farmers in the province.

She also wants the minister to challenge any federal policies that negatively impact farmers and the agriculture sector.

"Continue to advocate on behalf of Alberta farmers and ranchers by identifying and pushing back on federal programs that hinder the advancement of production or improvement of yields to better supply Albertans and the world with food," Smith said in the mandate letter to Nate Horner.