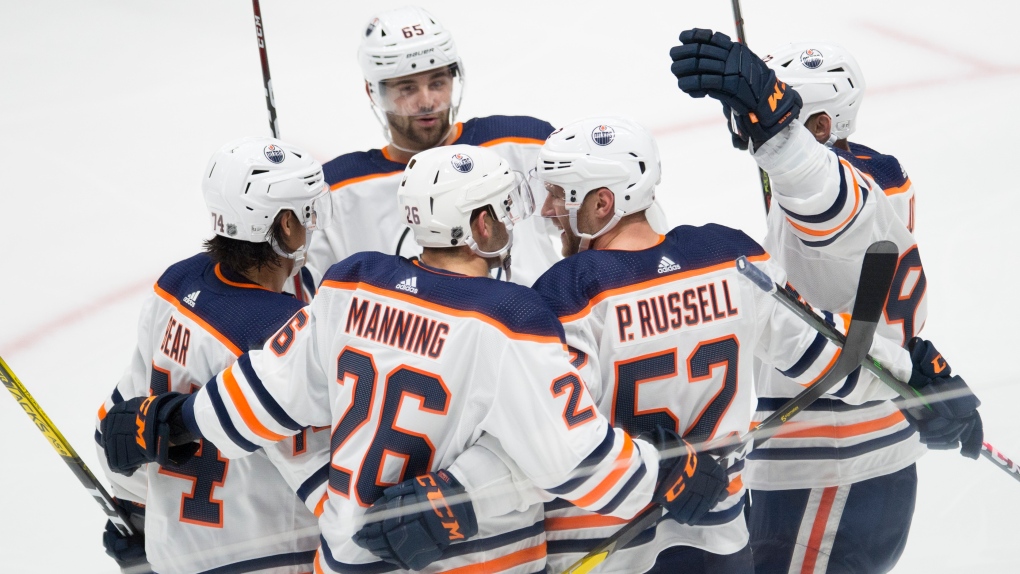 VANCOUVER - He may have scored and earned praise from his coach on Tuesday night, but Vancouver Canucks centre Elias Pettersson was less than impressed with his first performance of the pre-season.

“I wasn't playing that good today,” he said after helping the Canucks to a 4-2 win over the Edmonton Oilers.

“I lost too many pucks, too many turnovers, I wasn't that good in the faceoff circle. But that's what pre-season is for, to get used to hockey games again.”

Pettersson, who was awarded the Calder Trophy as the NHL's rookie of the year last season, logged 18:36 of ice time in the contest and put away a third-period goal to temporarily tie the game.

The sophomore centre also struggled in the faceoff circle, winning six-of-13 battles inside the circle.

Canucks coach Travis Green was quick to disagree with Pettersson's assessment of his game.

“He was picture perfect in my eyes,” he said. “He got us a big goal, that's for sure. There's always things that you learn, whether it's regular season or exhibition. He's still a young guy and learning as he goes.”

“I thought it was an alright game for exhibition hockey. A little sloppy at times. We did some good some things, did some bad things. Found a way to win,” the coach said.

Veteran centre Brandon Sutter put in a big night for the Canucks, scoring a pair of goals in his first game since undergoing surgery for a sports hernia in March.

His inaugral tally came 16:19 into the first period after the Oilers turned the puck over at their own blue line, leading Sutter to a breakaway.

Edmonton defenceman Dmitri Samorukov hooked him as he released the puck, leading to a penalty shot.

Sutter skated in and patiently waited for Starrett to drop, then put a backhand up and over the sprawled-out netminder.

He also put the Canucks up midway through the third frame, deflecting in a long shot from defenceman Alex Edler.

Despite the performance, Sutter said there's still rust to be knocked off as he prepares for regular season action.

“In these exhibition games, you just want to feel good. And tonight no one really feels great yet but obviously when you score it's nice. It's been awhile since I played, for sure,” he said.

Tanner Pearson rounded out the Canucks scoring with an empty-net goal in the final minute, and registered a helper on Sutter's second goal.

Patrick Russell and Tomas Jurco each scored for Edmonton, and Cooper Marody registered a pair of assists.

Oilers coach Dave Tippett said the trio have been working to solidify their spots on the roster coming out of training camp.

“You see those guys like that, they're competing hard for jobs and that's good to see,” he said.

Edmonton went up 2-1 early in the third period, but couldn't hang on to the lead.

Still, Tippett liked a lot of what he saw from his squad.

“A lot of try in our game which is really good to see,” he said. “Ultimately we made some plays that bring a little trouble on ourselves and they capitalize on it. But not from lack of try.”

The Oilers were light on big names in their second pre-season matchup of the year on Tuesday, opting to keep top talents Connor McDavid, Ryan Nugent-Hopkins and Leon Draisaitl back in Edmonton.

The two sides will face off again on Thursday when the Oilers host the Canucks.