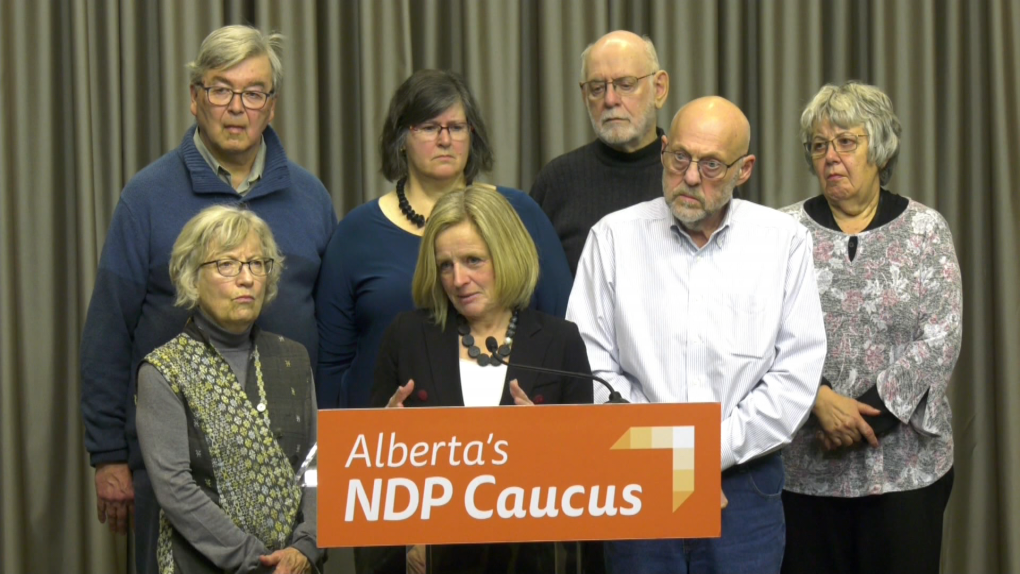 NDP Leader Rachel Notley is hoping to stop the government from ending benefits for spouses and dependents of seniors under the Seniors Drug Benefit Program. Feb. 5, 2020. (CTV News Edmonton)

EDMONTON -- The Alberta Opposition says changes to drug plan benefits affecting 60,000 people are not only heartless but could lead to higher health spending in the long run.

“This is a cruel decision with serious impacts for the health of senior households,” Notley told a news conference Wednesday.

Right now, Albertans 65 or older and their spouses and dependents, regardless of age, get help covering the cost of their prescription drugs.

The program began in 1972, but the government says it's an outlier and no other province covers dependent and spousal benefits under senior drug plans.

Alberta, citing cost and also fairness, is ending the subsidy for spouses and dependents on March 1. The government notes that 46,000 Albertans under 65 have applied for and are getting a benefit that is being denied to nearly four million Albertans who are the same age.

About 14,000 Albertans eligible for the benefit are not using it.

The program costs $600 million a year and has been growing at eight per cent annually. The change will save an estimated $36 million a year.

Those moved off coverage will still get benefits under the Alberta Blue Cross Non-Group program at a cost of $63.50 a month, or less if they qualify for low-income subsidies.

Notley and seniors advocate Frederick Brick said for families on limited and fixed incomes, that small monthly amount is a large expense, and one they didn't plan on when they drew up their retirement plans.

“They're forced at some point to make a choice: 'Am I able to get the drugs I need and my family needs or do I feed my family, (or) do I look after putting a roof over their head?”' said Brick with the National Association of Federal Retirees, who shared the podium with Notley at the news conference.

Both said the $36 million is a false saving because people who can't pay for their medications will get sicker, That could mean a greater potential to be hospitalized or require assisted living or long-term care.

“This is a very short-sighted approach,” said Brick. “The reality is we face larger problems and greater costs.”

The province is also exploring whether there should be income testing for well-off seniors to see if they should contribute to the drug benefit plan.

While no decisions have been made on that, Notley said income tests don't work in health care because of the wide variables involved: pharmaceuticals can spike in cost or a healthy person can suddently developed major medical issues that need thousands of dollars in drugs.

“Illness doesn't look at your bank account. And costs can appear out of nowhere.”

Health spokesman Steve Buick, in a statement, replied: “We do find it interesting that Ms. Notley is now arguing that multimillionaires need taxpayers to fully cover their prescription drugs under the seniors drug plan.”

The change is part of a larger Health Ministry plan to reduce costs while maintaining quality of care. Alberta is spending $20.6 billion on health this year, equivalent to more than 40 per cent of the operating budget.

This report by The Canadian Press was first published Feb. 5, 2020