CN was granted the 30-day order, with an option to extend it or vary it, after arguing the blockade is a safety hazard and would have a significant negative impact on CN’s business and its customers.

Lawyers told court CN moves $135 million of freight through its Edson Subdivison each day, including perishable and flammable goods.

When granting the injunction, Justice Paul Belzil said it’s significant that CN is not involved directly in the dispute between the federal government and indigenous groups.

Just confirmed with a CN employee that the tracks here were not damaged or tampered with. The car involved in the protest will be towed. Trains will be rolling through here again in about an hour.

The blockade was set up at Range Road 261 and 110 Avenue near Acheson, Alta., by the group Cuzzins for Wet'suwet'en. The estimated two dozen protesters started building the blockade before 5 a.m. in support of the Wet'suwet'en hereditary chiefs.

By noon, several vehicles had passed through the area with some drivers occasionally stopping to engage those on the tracks.

At one point, a man who identified himself as an oilfield worker of 22 years approached the group.

"You know how much this protest, this pipeline nonsense has cost me so far?" he asked.

One of the protesters replied, "Do you know how much it cost the Wet'suwet'en to be forcibly removed from their own community, their own land?"

"This is not the solution," the man replied. "There's thousands of people that are losing their jobs becuase of this. You're making more poverty. Why? Why ruin things for the people that are trying to f****** get ahead? Everybody wants to get ahead in life."

On Wednesday, Via Rail said it had "no choice" but to issue temporary layoff notices to nearly 1,000 employees while rail blockades were ongoing. Via Rail's passenger service has been suspended across Canada, and CN Rail has shut down its eastern rail netowrk.

Alberta Justice Minister Doug Schweitzer said in a statement on Twitter the protests would "not be tolerated" and that Alberta supported the injunction sought by CN Rail.

It is my expectation that law enforcement will take all appropriate action to enforce the law.

We will continue to monitor the situation and work with all relevant stakeholders to ensure the law is upheld and that rail service is maintained.

The cross-country protests are a show of solidarity with Wet’suwet’en hereditary chiefs, who have opposed the construction of the Coastal GasLink pipeline project through their territory.

The Chiefs of the Confederacy of Treaty Six First Nations are among those who have expressed their support. On Wednesday, they issued a statement calling upon law enforcement to ensure the safety of the protesters, RCMP to leave Wet'suwet'en territory, and Canada's Prime Minister and B.C.'s premier to meet with the Wet'suwet'en people.

"Canadians like Andrew Scheer and anyone else who believes that this should be resolved through force, should check their privilege," the letter, signed by Grand Chief Bill Morin, reads.

'RECONCILIATION DOES NOT MEAN ALLOWING A COUPLE OF PEOPLE TO SHUT DOWN THE NATIONAL ECONOMY': KENNEY

However, that the project has been approved by elected band councils along the route needs to be respected, Alberta Premier Jason Kenney said on Wednesday.

"Enough is enough. It's time for the decisions made by First Nations to be respected in this regard," the premier told media at an event in Calgary.

"Reconciliation does not mean allowing a couple of people to shut down the national economy. Reconciliation means listening with respect, ensuring Indigenous people get a chance to benefit from responsible benefit and move their people from poverty to prosperity."

Indigenous leaders called on the federal government Tuesday to work with the hereditary chiefs to find a mutually beneficial solution.

There was an emergency debate in the House of Commons on that night, called by the NDP and the Bloc Quebecois. Prime Minister Justin Trudeau faced criticism for his approach so far and preached patience.

Kenney said he would be talking with Canada's premiers Wednesday afternoon about the Coastal GasLink protests.

While a lawyer for CN was in court, the blockade near Acheson was being dismantled, seemingly by both protesters and counter protesters. 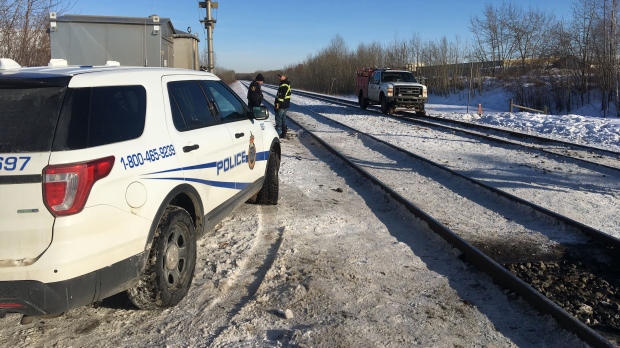 Earlier in the day, one group announced plans to counter protest at the Acheson location. United We Roll, a group that rallied support for the energy industry by organizing a convoy to Ottawa last year, said it would be leaving the Red Deer at 2:30 p.m. to arrive at the blockade.