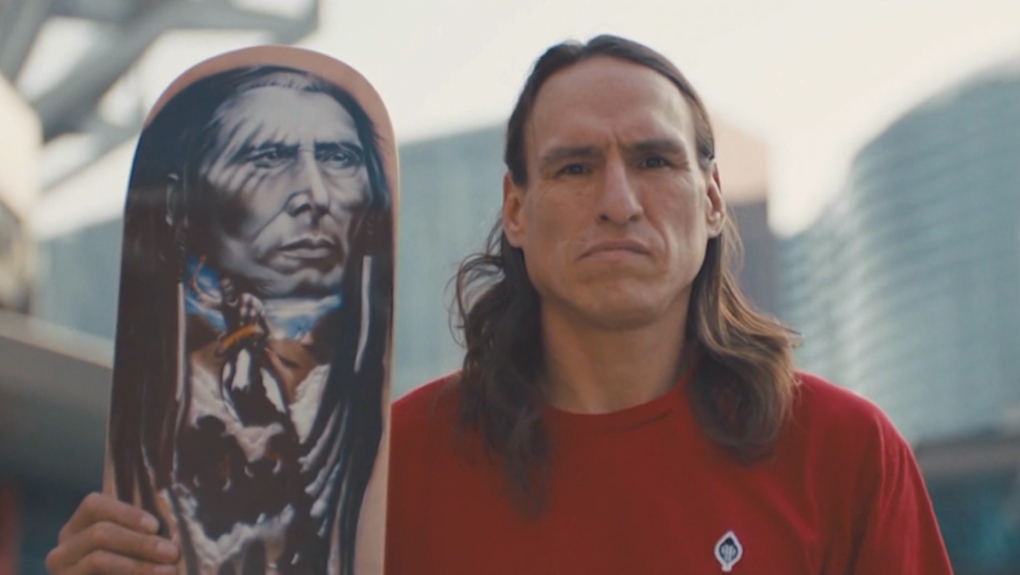 A still from the documentary Joe Buffalo which had its world premiere in February 2021.

EDMONTON -- A short documentary is highlighting the life of a professional skateboarder originally from Samson Cree Nation in Maskwacis south of Edmonton.

Joe Buffalo has gone through many trials and tribulations to get to where he is now. His journey is chronicled in the new film Joe Buffalo.

"I was raised traditionally through ceremony and speaking my language but when I was 11 years old I was taken off reserve and forced into residential school," Buffalo explains in the film's trailer. "Who are you supposed to run to? When you say, 'Mom? Dad?' Who's going to come and protect you from these people?"

Filmmaker Amar Chebib is behind the documentary. He met Buffalo in Montreal in the summer of 2005.

"Hanging out at this place called Peace Park where everyone rolled through. Got chased away by the cops and came back and skated more," laughed Chebib. "I think 2019 was when I heard about Joe turning professional and I was like, 'Whoa! I remember that guy.'"

Buffalo describes skateboarding as a tool that has helped him navigate through life.

"Skateboarding on its own is powerful enough," he told CTV News Edmonton. "But I wasn’t always focused on it. There were times when there were a lot of distractions."

Working through his traumatic childhood and overcoming decades of addiction among his biggest hurdles.

"Just because the system has programmed me to self-terminate doesn’t mean I have to go that route," said Buffalo.

"I was sort of blown away by just by how much he has had to overcome to get where he is," said Chebib.

Chebib hopes because his film is also about skateboarding, it will appeal to a demographic that may not normally watch a documentary on residential schools.

"Many people are familiar with that legacy but they didn’t know that the last school didn’t close until the nineties," he said.

The film had its world premiere at the Big Sky Documentary Film Festival in February and recently won an audience award at SXSW.