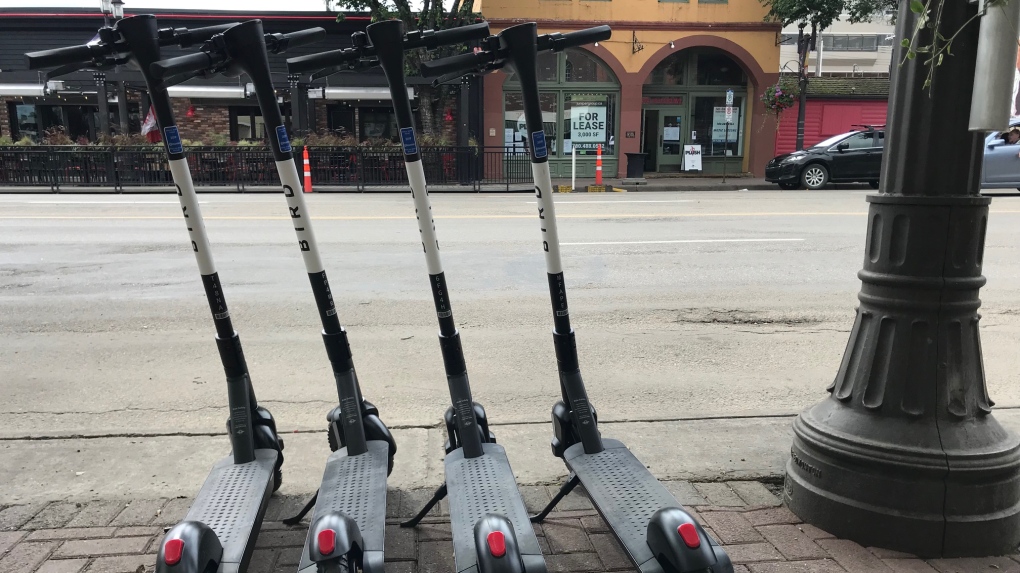 E-scooters are back in Edmonton - with some changes. (File Photo)

A pair of e-scooter companies are racing each other to hit Edmonton streets first.

Lime, a San Francisco-based e-scooter company, says it's set to roll out its fleet on Saturday, with an initial 200 out of 1,000 scooters up and running for this weekend

"We are excited to ... help better connect communities across Edmonton with our fleet of electric scooters that make it easier and more affordable to get around," said Chris Schafer with the company.

CTV News Edmonton has also learned Bird Canada, a California-based e-scooter company, will launch officially on Monday but scooters were on Edmonton streets as of Friday for testing purposes.

Edmontonian Ranon Soans was one of the first to spot the new scooters on Whyte Avenue.

In June, Bird Canada's CEO, Stewart Lyons, said customers will be able to use the machines at a cost of $1.15 to start and 35 cents a minute after, a rate which he says makes the service competitive with public transit.

"We don't anticipate having those kinds of problems," he said.

"That won't be an issue for us. Nowadays, what Bird typically does and what we will do, we have full-time people who go out in the middle of the day or late at night and move the scooters around. Back in the day, they didn't do that."

The wildly popular e-scooter pilot program has been a hit in Calgary, with more than 150,000 riders using the service.

Alberta Health Services officials say since July 10 of this year, 145 people have ended up in Calgary emergency departments from scooter-related injuries.

AHS says head injuries are the most common kind of injury among scooter riders followed by upper body fractures. It says first-time riders are most at risk to get hurt.

"If you haven’t ridden an e-scooter before, try to ride it in an area on a pathway that’s not congested with people," said Andrew Sedor with the City of Calgary’s transportation department.

AHS is urging riders to know the equipment, safety regulations and rules of the road before they roll out.

"If it enhances someone's general health and happiness we're all for it, we just say be safe in doing it," said Dr. Shobhit Maruti with AHS.