Edmonton weather for Nov. 26: Mild end to the month 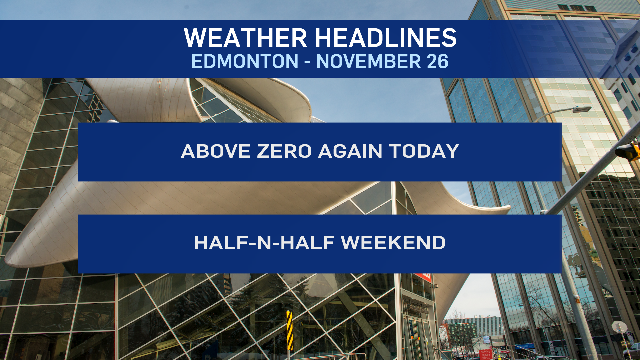 EDMONTON -- Our run of mild weather will continue right through the weekend and into early next week.

Daytime highs above zero for most of the next five days in Edmonton.

As for precipitation, we've had a few showers in areas southeast of Edmonton this morning (in the Tofield to Provost roughly).

Tough to tell if any of that hit the ground in the city as the radar is still undergoing upgrades. But, it looks like there was probably a bit of a sprinkle in a few areas.

The good news is that temperatures in most areas are at or above zero. So...freezing rain isn't expected to be an issue, although some streets and sidewalks will be slick.

(In case you're wondering about that Carvel radar, the latest update from Environment and Climate Change Canada has it scheduled to return to service mid-December.)

In Edmonton, we'll get to a high of 4 or 5 C around 2-3 p.m. and temperatures are expected to drop off rather rapidly in the early evening.

It's not getting COLD, but we'll slide to a morning temperatures around -10 C Saturday morning.

We'll be sunny for most of the day Saturday with some cloudcover increasing from the west late in the day.

Temperatures probably stay JUST below zero in the afternoon and then hold steady or rise slightly Saturday night/Sunday morning.

By Sunday afternoon...we're right back to a handful of degrees above zero and the mild, well-above-average temperatures continue through the first half of next week.

So, neither day looks "nasty." But, Sunday will definitely be the warmer of the two days this weekend.

LONG Range - Daytime highs continue to be in the 1 to 5 C range Monday - Thursday.

A bit of cooling is expected to drop in towards the end of next week.

At this point, it doesn't look TOO cold. But, we're probably looking at highs in the -5 C range.

Saturday - Sunny in the morning. Increasing cloud late in the afternoon.