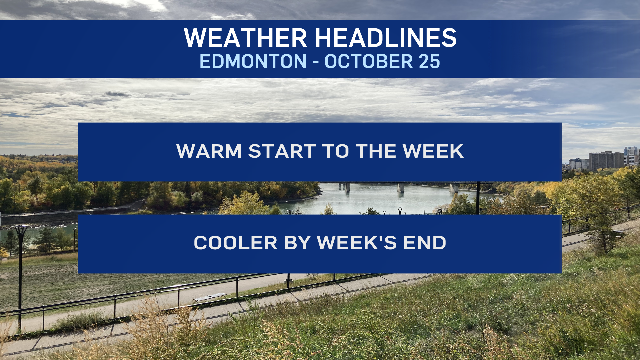 We're in for a fairly dramatic chance in the pattern as we head through this last week of October.

Daytime highs in the 10 to 14 degree range for today through Wednesday.

But, we'll be in the five to 10 degree range Thursday/Friday and then between 1 and 5 C for the weekend.

That's not far off average for the end of October.

We'll be a couple degree above the avgerage high of 8 C in Edmonton early this week.

We've had a few showers in parts of the Edmonton region early this morning (after picking up 17 mm of rain on Saturday in the city).

The precipitation should be a be mostly done and out of the area by the time you're reading this.

We'll get some clearing in the Edmonton area for this afteroon.

Sunny again Tuesday and then a few clouds Wednesday/Thursday.

We were talking about the risk of snow for Halloween on Friday.

But, that system now looks like it's going to stay well to the south of the Edmonton region.

Southern Alberta could get a dump of snow on Saturday. Parts of northern Alberta might also see a few scattered flurries Friday/Saturday.

The Edmonton region looks to be in the clear though.

Tuesday - Sunny with some afternoon clouds.