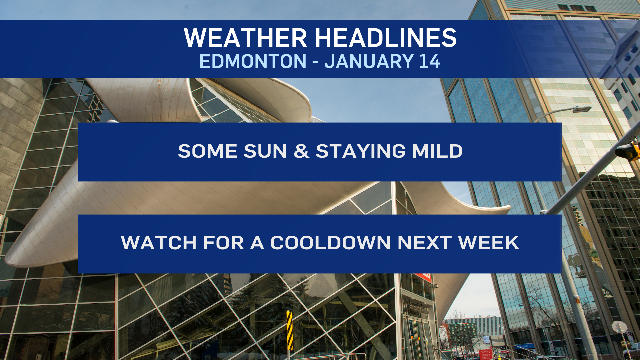 It's been a month of swinging temperatures.

We had a week-long run of highs in the -20s and now we're on day four of what should be a seven-day stretch of highs above freezing.

Looks like we'll see another big swing next week. Although, it probably won't last for an entire week.

We'll be partly cloudy with highs a degree or two above 0 C today and Sunday.

Saturday looks like the warmest day of the weekend with a high near 5 C.

There's a risk of some freezing rain or wet snow (again) late Sunday night in the Edmonton region.

AND...maybe some flurries or snow on Monday.

But...it's after Monday that temperatures tumble.

There's still a wide range of possible daytime highs for Tuesday and Wednesday.

But, the one thing we're fairly certain of is that it's going to get a lot colder.

The REALLY long-range outlook pulls us back into some mild temperatures by Thursday or Friday and right back to highs near or above zero by next weekend (Jan 22/23).

Again - that's a LONG ways off. But, that's how it's shaping up as of now.

So...enjoy the mild temperatures for the next handful of days and watch for things to get colder (at least for a couple days) next week.

40% chance of freezing rain or wet flurries in the evening and/or overnight.

Canada's top doctor has said the latest wave of COVID-19 driven by the Omicron variant may have reached its peak. But while the modelling appears encouraging, experts say the news should be interpreted with cautious optimism.