EDMONTON -- Edmonton could see a boost in positive publicity but not an economic bonanza should it be named a hub city for remaining National Hockey League competition, according to a University of Alberta professor.

Brian Soebbing, an associate professor, with the school's faculty of kinesiology, sport, and recreation, says hosting games would showcase Alberta's capital to the hockey world, but notes that pro sports isn't typically a major economic generator.

Without spectators in the stands he says any economic bump will be largely limited to the league, Oilers and the hotels and facilities used by the quarantined visiting teams.

"I don’t think from an economic impact standpoint we’ll see a whole lot because there won't be fans at the game and we’re still at reduced capacity of bars and restaurants," he said.

"The economic impact of pro sports teams and facilities is none to very little to begin with."

The NHL was forced to pause its schedule March 12 amid the COVID-19 pandemic with 189 regular season games still to be played.

The league is now considering a format that would feature the top 12 teams from each conference, with the top four in the East and West receiving a byes to the playoffs, according to TSN.

Those four would play their own round-robin competition for playoff seeding, while the remaining eight teams would compete in best-of-five series.

Under that proposal, the games would be played at an as yet undetermined number of hub cities.

Teams and players would be sealed off away from the public among other protective measures.

“We don’t live in a world of perfect anymore,” NHL commissioner Gary Bettman said in April. “We’re going to have to make adjustments.”

The details of the NHL's plan have yet to be revealed, and it's not clear when they, or the host cities, will be revealed. 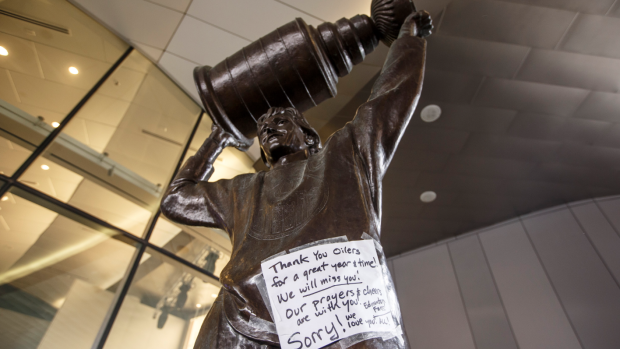 Edmonton is one of three Canadian cities that have expressed interest in serving as a hub city.

Ontario Premier Doug Ford said the Toronto Maple Leaf's parent company had been in contact with his government about serving as a host city.

"They're coming up with a game plan, (the) NHL as a whole. They haven't really divulged anything else as of yet, but we have had a conversation," Ford said.

The Vancouver Canucks have also expressed interest, and British Columbia Premier John Horgan has spoken with Bettman about the possibility of serving as an NHL hub.

"We have WHL rinks in Victoria, in Kamloops, in Kelowna, in Prince George," Horgan said. "We have hotel space, so the sky is really the limit."

Horgan also noted the economic advantage to B.C. of being a host city would be "barely a blip," in an interview with TSN Radio.

Edmonton's bid is supported by both provincial and civic leaders.

Mayor Don Iveson described the city as "an ideal location" to host the remaining games.

"By bringing hockey back to a smaller market, the NHL would generate a significant boost to a great hockey city that has long laboured to create conditions to support the game."

And, Premier Jason Kenney deemed the city to be "the safest place they could find on the continent" while noting Edmonton's low COVID-19 infection rate and the province's high testing rates.

"We've got a very strong pitch to make," he said. "The beating heart of hockey and the NHL is the Canadian prairies. I can’t imagine a better place to come to."

Edmonton's proposal centres around Rogers Place, its practice facilities and neighbouring hotels. It's also pitching a "lifestyle" for NHL players, including a secure golf course, workout facilities and outdoor screens for movies. 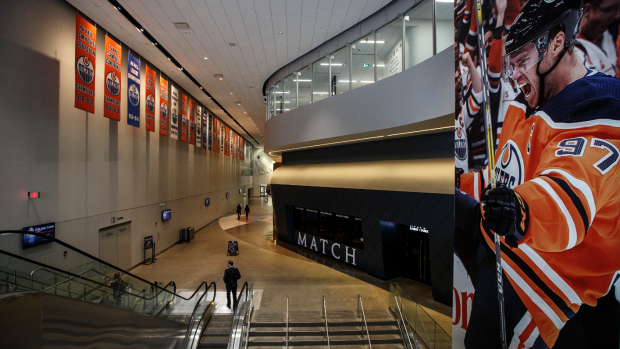 Kenney also noted Edmonton could see a boost in positive publicity should it serve as a showcase city.

"We’re going to need to kickstart our tourism industry as we come out of the pandemic and I can’t imagine a better way than tens of millions of people seeing the NHL playoffs coming out of Edmonton Alberta."

While Soebbing is skeptical of any immediate economic gains, he says Edmonton beating out other rival Canadian cities would give it a point of prestige.

"If businesses are looking to relocate … arts and culture and entertainment and sport are part of that civic competition," he said.

"Edmonton having that over other cities like Vancouver that they are looking to compete for flows of capital. That might also lead to some sort of benefit."

Dollars and cents aside, Soebbing says there's also a potential indeterminable value for the city should it be selected as a host.

"We’re dealing with a time with which we have no real comparison."