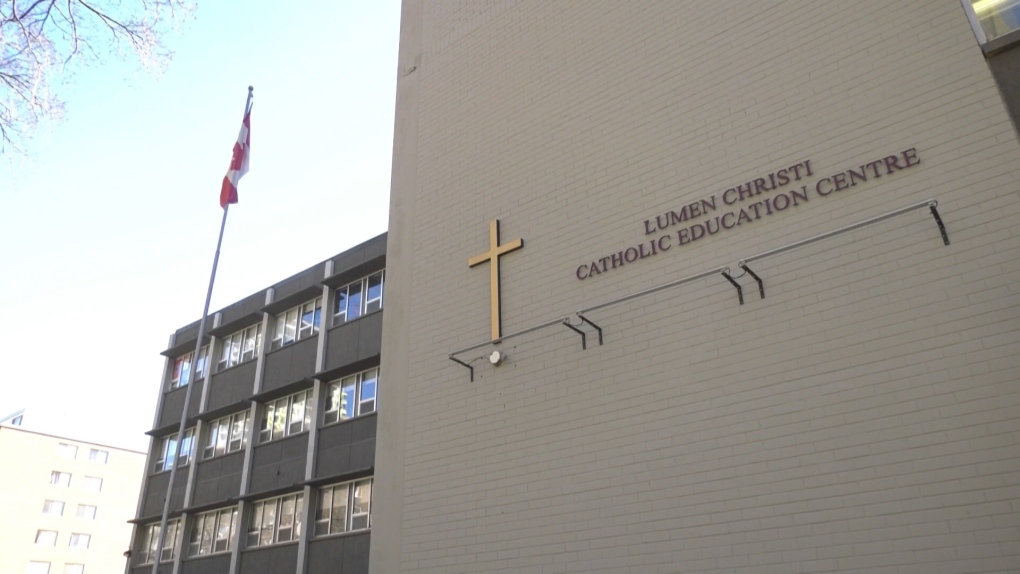 EDMONTON -- Edmonton Catholic Schools has prepared a 32-page handbook for its return to in-person classes in September, but the division says it will also be offering online programming for families who don’t feel it is safe to send their children back.

“We have heard feedback from so many parents, and because I’m an educator myself, I believe that going back to school is something both families and students particularly need,” Sandra Palazzo, a third-year trustee, commented on Tuesday.

“Many of them understand and would like to see all of their children back and in schools, however some of them are not quite comfortable.”

The re-entry plan will see changes before the fall.

On Tuesday, it was being updated to reflect an announcement by the provincial government it would be supplying personal protective equipment and hygiene supplies to schools.

Alberta will be requiring students in Grades 4 to 12 to wear masks in common areas and on school buses, and providing at a total cost of $10 million two reuseable masks per student and staff.

Palazzo called the news “an additional layer of protection that we are supportive of.”

Here’s what Edmonton Catholic Schools is planning for a Scenario 1 return in the fall:

GOING BACK TO THE CLASSROOM

Alberta Education has instructed divisions to prepare for students to return to classrooms in September, with COVID-19 risk mitigation strategies in place and plans to accommodate a switch to Scenario 2 or 3 if the pandemic sees a second wave.

Already, the Catholic district has decided to split the senior levels of programming into quarters, rather than two semesters.

The finer details of how schools will operate are outlined in its re-entry plan.

Cleaning and hygiene protocols will follow the advice of the chief medical officer of health.

Guardians will be responsible for assessing their children’s condition prior to the school day; staff will be expected to do the same for themselves.

Students will not have access to lockers, microwaves and vending machines – all considered to be high-touch surfaces.

Cafeterias will only provide pre-packaged food. Plexi-glass barriers will be used in other high-traffic areas where possible.

In order to maintain cohorts, schools will enforce a “closed campus” rule for K-9 students; they will not be able to leave school property during the day.

Similarly, students will remain in the same classroom as much as possible. Class changes could be staggered, and teachers will rotate rooms.

The Catholic board will be following all the same isolation requirements as are mandated by the province, and asking students or staff who are displaying symptoms to stay at home until assessed by the health care system.

Deputy superintendent Tim Cusack told CTV News Edmonton schools would help any students who had to isolate to continue learning.

“We want to be as minimally disruptive as possible. If it were more protracted and prolonged complications, of course we’re going to work with our families to provide the most feasible and effective way to deliver education.”

If someone began showing COVID-19 symptoms during the day, staff would have to self-isolate and students would be put into a quarantine area until they could be taken home.

The school would have to inform Occupational Health and Safety of any positive diagnosis, and work with Alberta Health Services to follow up with the rest of the student body.

As of Tuesday, the handbook still deferred guidance on mask use to provincial advice – although a new version was expected to quickly replace it.

“Our plan is a living document. We have to flexible and nimble. It changed at nine o’clock this morning and we’re going to be updating it for this afternoon,” Cusack said.

Edmonton Catholic Schools is in the middle of surveying parents on whether their children will return to school in person or online come September.

Palazzo said she had heard of some “anxiousness” amongst families at the idea of children returning to the building in just four weeks.

However, the division has released few details about its learn-from-home plan, saying the survey results will contribute to both internal planning – like decisions about classroom sizes – and external decisions, such as staffing.

Cusack told media Edmonton Catholic was researching other school districts’ plans to develop its own.

“We’re not in this alone. We’ve had opportunity to look at the various plans. We’ve conducted a lot of research within Canada and around the world to make the most informed decisions possible,” he said.

“Edmonton Catholic Schools is prepared to respond to all three of those scenarios as seamlessly as is practicable. We feel very well prepared.”

Edmonton Public Schools is making similar preparations, offering parents a choice to send kids back to school buildings or keep them at home.

Palazzo estimated the division could need between $4 million and $5 million to fund its COVID-19 response.

Officials said Edmonton Catholic has about $7 million in reserves, or “modest equity,” but would continue to ask for provincial dollars.

While Cusack said the district had a stock of PPE and sanitation supplies for the first couple of months, the government’s commitment on Tuesday of more materials would help.