EDMONTON -- Five firefighters will be braving the elements from the roof of a downtown fire hall for the next three nights to raise money for a good cause.

The men made their way up an Edmonton Fire Rescue ladder truck Monday morning to begin the annual Rooftop Campout for muscular dystrophy.

Firefighter Wesley Bauman will be taking on an extra challenge this year when he climbs into an "ice coffin" and surrounds his body with ice.

"With the cold, it's very similar to the symptoms of the disease," he told CTV News Edmonton from the roof of Fire Hall #2. "So this is sort of what we're doing to emulate the suffering that the people we're here trying to help go through on a daily basis.

"We're just doing it for a week, these guys do it for a lifetime."

Bauman has been preparing for the ice coffin in various ways. "Cold showers and eating healthy. Just doing everything I can." 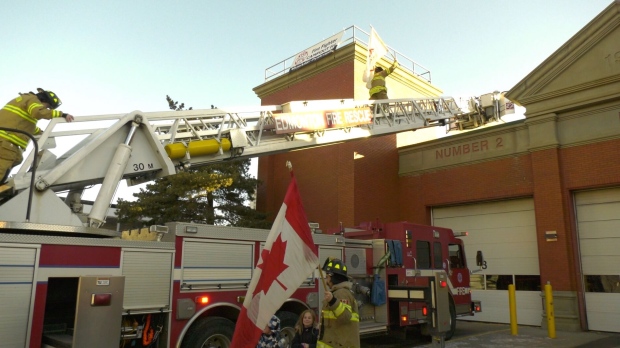 Since 1954, fire departments across North America have been raising money for muscular dystrophy — a trend that was started in Boston.

The fundraising event came to Edmonton in 2005.

During last year's fundraiser, the rooftop crew decided to extend their stay when they were still $40,000 short of their goal. After three more days, they managed to raise an extra $32,000.

This year's goal is to raise $100,000 for Muscular Dystrophy Canada. You can donate at Fire Hall #2 or online.

The men are aiming to come down Thursday, Feb. 13 at noon.