Michael Sharpe's fingers are blackened, swollen and cracked. And he says they hurt after being forced out of an Edmonton LRT station and into -30 degree Celsius weather early Wednesday morning.

"The peace officers came through removing everyone systematically. We were put out in the cold at about 2 a.m.," Sharpe told CTV News Edmonton Thursday.

Sharpe and his girlfriend live on the streets of the Alberta capital and sometimes sleep in LRT stations.

After they were kicked out, he said they went to the Commonwealth Stadium emergency shelter seeking a place to sleep.

"They were full, so they weren't taking anyone else in. So we were turned back. So we tried to stay warm in the subway," he recalled.

While huddled in the Churchill LRT Station downtown, Sharpe said they were kicked out again by peace officers.

"They went through telling everyone time to go, get out, go find somewhere warm. You'd expect more humanity from the city," he said.

A spokesperson for the City of Edmonton said transit officers are supposed to kick people out of LRT stations, but they have to offer them an alternative safe space.

"People at Churchill were offered transportation to shelters, though accepting the support provided is not mandatory nor forced on individuals," Geoff Grimble wrote in a statement.

He added 107 people were given free rides to city shelters Tuesday night, including 21 from Churchill station.

"The City’s LRT system and stations are not part of the extreme weather response as transit stations and centres do not hold the adequate washroom or comfortable space to shelter people for prolonged periods," Grimble wrote.

Sharpe claimed he wasn't offered a ride to a shelter. Instead, he wandered the streets for hours before going back to the LRT station to warm up.

"I thought I was soaking wet walking there, but I wasn't wet at all, I was frozen stiff," he said. 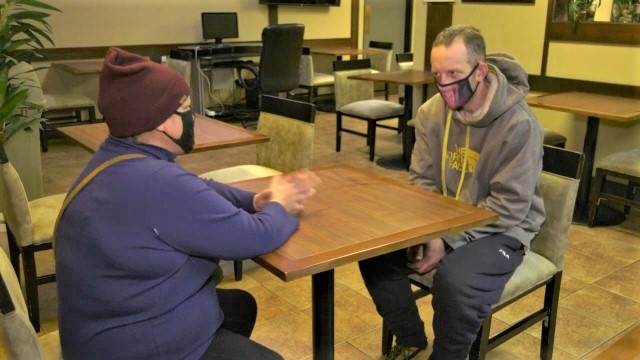 "I was so mad, mad, mad," said Judith Gale with the Bear Clan, a group that helps vulnerable people on city streets.

"You're sending people, quite frankly, to their death when it's -42 (with the windchill)."

Gale and the Bear Clan put Sharpe and his girlfriend up in a hotel.

She wants the city to allow people experiencing homelessness to sleep in a section of the LRT system when it's extremely cold.

CTV News Edmonton requested an interview with Mayor Amarjeet Sohi about this, but a spokesperson said he was unavailable.

"Our office is reaching out to support organizations like Bear Clan and others to work with them to ensure everyone has a safe space to keep warm as we work towards long term housing solutions," Lindsay Harvey said.

Last winter, an Edmonton Police Service deputy chief made a public apology after officers removed vulnerable people from Churchill Station without offering them a safe place to go.

He added that a shuttle to those shelters was provided for people who wanted a ride.

“Although the internal review found that extreme weather protocols were followed, it is clear they did not work for everyone," Corbould wrote.

"The city will work with service providers, and invites feedback from clients involved to better understand what happened and how these circumstances can be avoided in the future."