Edmontonians stand against racism at Building Bridges Against Hate walk

EDMONTON -- Over a hundred Edmontonians gathered Saturday to make a stand against racism and hate.

Participants walked from Wong’s Benevolent Association in Chinatown at 10242 96 St.and proceeded to Churchill Square where a program of speakers highlighting lived experiences with hate, racism, and discrimination took place.

Serena Mah, a member of Act2End Racism and co-organizer of the event, said in a speech that the event was organized to show community support and solidarity following the recent attacks in Atlanta and incidents against Muslim and Black women in Edmonton, Calgary, and Canada.

“There is so much sadness,” she said. “(We want) an Edmonton that is safe for everyone.”

Keren Tang said that coming together with everyone today has helped her come to terms with the recent outbursts of anti-Asian racism.

“I look around this square, there’s people from different nations and communities. This is our city.” 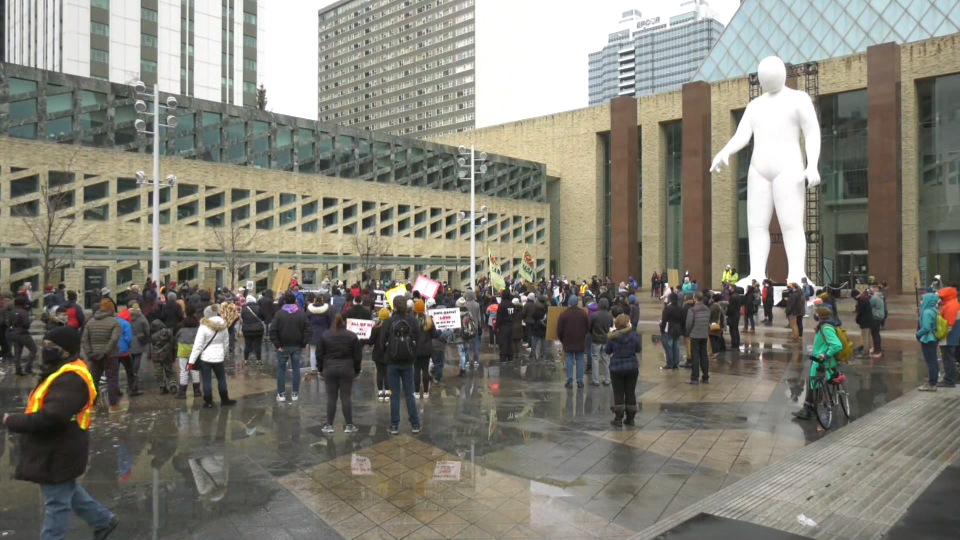 Wati Rahmat, one of the rally's organizers and co-founder of Sisters’ Dialogue, said that everyday she is faced with discrimination and judgement on a daily basis.

“As a brown Muslim woman being treated differently and being discriminated against is nothing new to me. I learned quickly that I was different.

“I am violently reminded that I am different when I hear of my sisters who look like me who are attacked for simply waiting for transit here in Edmonton. This is not okay.”

Rajah Maggay, a research and policy advisor and vice chair of Research ParityYEG, shared to the crowd about her immigrant family from the Philippines and growing up as a first-generation Filipino in Edmonton.

“My family will always tell me how lucky I am, how blessed I am. Lucky that I was born here. Lucky for my job. Offhand comments that the only people Filipino people who work at city hall are custodians.”

Maggay reflected that with the recent attacks in Atlanta and in Calgary, luck might not be the most accurate feeling at a time where anti-Asian racism is spiking.

“But I don’t know how particularly lucky we all feel when the wash of relief floods over you thinking, ‘oh thank god it wasn’t me,’” Maggay said. “Whatever luck we have is wearing thin. And now we know we must change the tides ourselves in solidarity with one another.”

“We aren’t asking for perfection, we are asking to be open to change.”

In an interview with CTV News Edmonton, Lucy Lu and Paul Gareau say they participated in the march to be in solidarity with their fellow community members in their effort to combat hate.

Lu added that her family is a mix of French-Canadian Metis and Chinese-Vietnamese heritage, so it felt important to take a stand.

“It’s really important that we are all here as nations talking to each other and supporting this pushback against white supremacy,” Gareau said.

Lu said it felt empowering to stand together against hate.

“We have to stand up with people together so that we aren’t feeling it alone,” Lu said.

Similar rallies occured in Calgary and Lethbridge today as well.