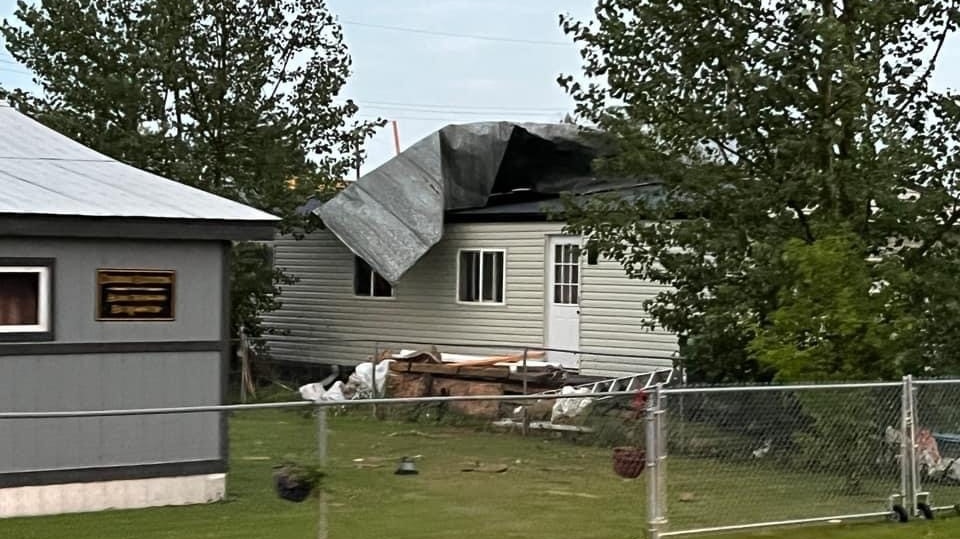 Damage done to a building in the Hines Creek area during a severe storm on Friday, July 29, 2022. (Source: Stephanie Kowal)

An emergency alert was issued Friday evening for a thunderstorm that potentially produced a tornado in northwest Alberta.

The alert was cancelled at 11:54 p.m. after the thunderstorm "was no longer expected to produce a tornado."

At 11 p.m., the Alberta Emergency Alert said a severe rotating thunderstorm was possibly producing a tornado near Girouxville, moving southeast at 50 kilometres per hour, with that community and Falher in its path. Around 20 minutes earlier, the storm was moving toward Tangent.

The initial alert was issued at 9:43 p.m. and then updated at 10:09 p.m. At that time, the storm was located 15 kilometres east of Fairview, Alta., moving southeast at 40 kilometres per hour.

"Seek shelter immediately in a basement or reinforced structure," the alert read. "Get low and put as many walls between yourself and the storm as possible.

"Stay away from windows, doors and outside walls. If you are on the highway and cannot avoid the tornado, seek shelter in a ditch or ravine."

Environment Canada issued a tornado warning at 10:06 p.m. for the following areas:

By 10:39 p.m., the tornado warning was in effect for Birch Hills County near Eaglesham and Highway 740 and the Municipal District of Smoky River, including Falher, McLennan and Guy.

"This is a dangerous and potentially life-threatening situation," the warning said. "Tornado warnings are issued when imminent or occurring thunderstorms are likely to produce or are producing tornadoes."

Fairview is a town in Peace Country located about 85 kilometres southwest of Peace River and 115 kilometres north of Grande Prairie.

At 10:12 p.m., Environment Canada issued tornado watches — indicating conditions are favourable for the development of severe thunderstorms capable of producing tornadoes — for the following areas: