'Evander is an amazing player': McDavid would welcome Kane to the Oilers 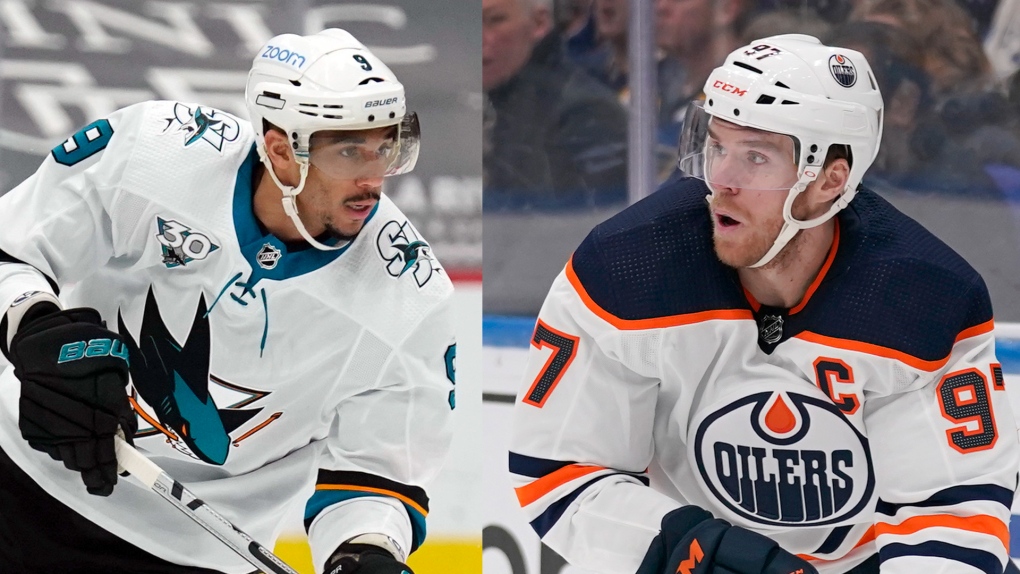 Connor McDavid spoke highly of Evander Kane's hockey skills Wednesday while brushing aside the controversies that may follow the former San Jose Shark to Edmonton.

Kane remained unsigned as the Oilers wrapped up practice, but Head Coach Dave Tippett confirmed that GM Ken Holland was still considering bringing him in.

"Evander is an amazing player,” McDavid said. “He's had lots of success over the last couple of years and whatever else has been going on is not something that I look into much.”

Kane, a top-6 winger with seven 20-goal seasons, is a free agent after the Sharks terminated his contract.

That team said Kane violated COVID-19 protocols while he was with the club's American Hockey League affiliate, even after he was suspended for 21 games earlier in the season for submitting a fake COVID-19 vaccination card.

Kane also faced accusations of gambling on hockey and purposely losing games he bet on, as well as sexual and physical abuse from his estranged wife, although an NHL investigation cleared him after finding no evidence in both cases.

There were also reports Wednesday that the NHL was investigating allegations that Kane crossed the Canada-U.S. border in December without proper clearance, shortly after he tested positive for the virus.

McDavid, who returned Wednesday after his second case of COVID-19, was asked about the optics of bringing in someone who broke pandemic rules at least once.

Tippett said the process was still unfolding and he refused to answer questions about Kane's controversies.

"It's a moot point for me. I'm not going to try to coach a guy that is not our team. If he ends up in Edmonton, then you can ask me all those questions," Tippett said.

"I think both sides are still doing their due diligence. I know Ken and his staff have talked about it. He mentioned it to me yesterday that they're looking at it, and from what I read Evander Kane is doing his due diligence about us too."

CONNOR READY TO PLAY ON SATURDAY

McDavid said he felt good after practice Wednesday, just days after he recovered from his second bout with COVID-19.

The Oilers' captain tested positive on Jan. 4, and was cleared from the NHL's protocol on Sunday. He also had coronavirus in October 2020.

"Just a little achy and a stuffy nose. Nothing too crazy, I feel good now," McDavid said.

"You're obviously not looking to get COVID, but it's almost like a mental break because you don't have to test anymore. It's exhausting sitting and waiting to hear your test, and you're trying to get ready for the game and you're not not sure if you're going to play."

Derek Ryan and Tyson Barrie were also back at practice after returning from the COVID list, but Kyle Turris was placed on it Wednesday.

The Oilers are scheduled to play Saturday night at home to the Ottawa Senators.

Canada's top doctor has said the latest wave of COVID-19 driven by the Omicron variant may have reached its peak. But while the modelling appears encouraging, experts say the news should be interpreted with cautious optimism.