Using steam from brine reservoirs deep underground, the power plant will generate five megawatts of electricity a year, enough to power about 6,800 homes.

“We have construction giants that know how to build projects to the highest standards in the world and we have a drilling industry that’s been at the forefront of most downhole drilling technology development," said Sean Collins, president of Terrapin Geothermics. "Geothermal development is a natural fit for Alberta."

Terrapin is behind the facility coming to the MD of Greenview’s tri-municipal industrial area. 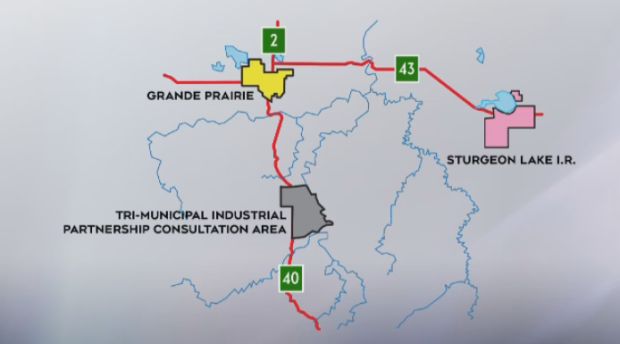 Proponents of geothermal say it has a very small environmental footprint since it does not create greenhouse gas emissions and does not impact fresh water reservoirs.

“This facility will run 24-7-365 producing made in Alberta geothermal renewable electricity and renewable heat,” said Collins.

On Friday, the federal government announced it's contributing $25 million to the development through its Emerging Renewable Power Program.

“If you have money to drill a four-kilometre well in Alberta, you can make more money drilling oil and gas but we are choosing to go after a resource that’s a longer term play,” said Collins.

PCL Construction is the drilling and construction partner on the project.

“We are looking forward to getting 1,000 jobs in here and the module yard to support this project,” said PCL Heavy Industrial COO Roger Keglowitsch. “Twenty-nineteen has been our first really tough year as we finish a number of construction projects so this means a lot.”

The power plant is expected to be constructed in about three years’ time.