'He messed with the wrong guy': Kassian on Tkachuk following two-game suspension

EDMONTON -- Edmonton Oilers forward Zack Kassian might have thrown gas on the fire Tuesday after receiving a two-game suspension for an altercation with Calgary Flames forward Matthew Tkachuk.

Kassian was on the ice for a practice at Rogers Place in Edmonton after being served the suspension on Monday.

The altercation happened in Saturday night's game against the Flames. Kassian took offence to a hit from Tkachuk in the second period of the 4-3 loss, tossed off his gloves and punched the winger while tossing him to the ice.

Kassian received a double-roughing minor and 10-minute misconduct on the play, which sparked frenzied debate on social media about predatory hits and retaliatory justice in the National Hockey League.

Many criticized Tkachuck for "turtling," after taking runs at Kassian but then refusing to drop the mitts with him.

“It was probably the right thing to do for me there,” said Tkachcuk following the game. 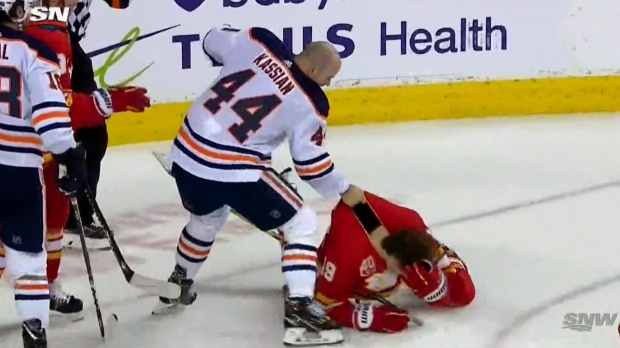 Others took issue with Kassian, saying the NHL deemed the hits clean and he's a big player who can dish out checks but perhaps can't take them.

Kassian offered his own thoughts on the matter Tuesday, saying he now understands what is a clean or dirty hit in the NHL.

"I can do what Matthew Tkachuk did," he said. "If the league is saying it’s clean I can do exactly that."

Kassian went even further with his comments, stating that the next Battle of Alberta is sure to be a feisty one.

"He messed with the wrong guy," said Kassian. "I don't think he realizes we're in the same division, and I have a great memory."

The scrap also has potential to make for some interesting moments at the upcoming NHL All-Star Game on Jan. 25 because Tkachuk will be teammates with Oilers stars Connor McDavid and Leon Draisaitl.

When asked what he would do if asked to share the ice with Tkachuk during the 3-on-3 tournament, Draisaitl said: “Probably get off the ice.”

Kassian has 13 goals, 15 assists and 64 penalty minutes through 44 games with Edmonton this season.

The next time the Oilers play the Flames is in Edmonton on Jan. 29, which also happens to be Kassian's first game back.