Historic sites abuzz with activity, a dozen bee colonies to be precise

EDMONTON -- As part of a pilot project, six historic sites in Edmonton are busy as bees hosting a dozen bee colonies.

One site is the Alberta Aviation Museum, where the flying insects are receiving a warm welcome from staff.

“A wonderful opportunity to delve into theories of flight using a bee as an example so I think this is going to be a great fit,” said Jean Lauzon, the executive director of the museum.

“I’ve heard in many years past that our bee population… has been on the decline and we needed to do something about it, so this is a way that we can give back to the community by helping the bee population.”

The bees are from B.C. and have been bred to thrive in Alberta’s climate. 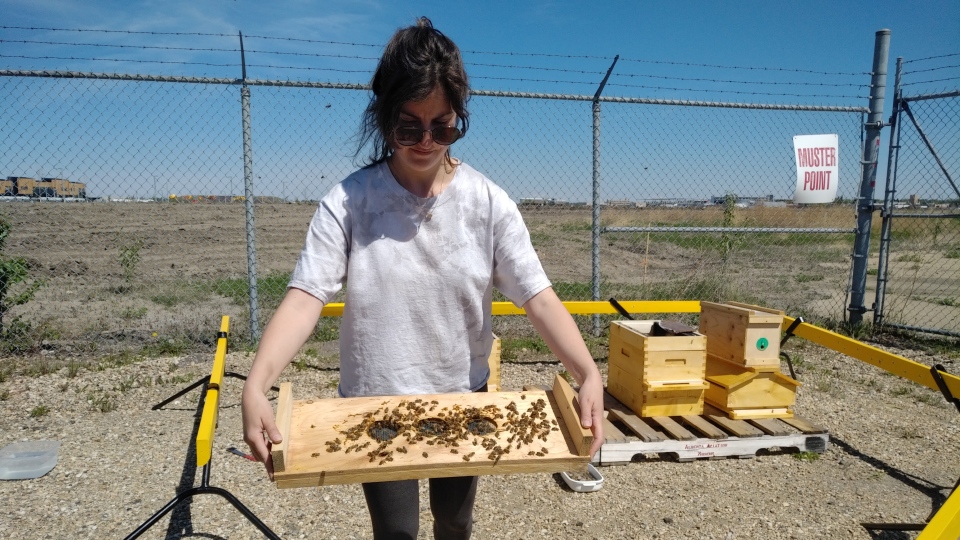 The project is called YEG Honeycomb, its aim is to increase the number of urban beekeepers in the city and across the country.

“To make the idea of bees and beekeeping in a city more commonplace,” said Enessa Habib.

She also hopes to see urban beekeeping policies in Edmonton. Currently, beekeeping is allowed on residential properties within the city.

“There is certain criteria that does need to be met such as taking one of the Edmonton approved courses for beekeeping and to have a mentor as well,” said Habib.

“I thought well, bees on rooftops would be pretty neat but we don’t actually have guidelines for urban beekeeping, even though there are currently bees on the rooftops of some buildings that we have.”

The project also aims to bring some new life back to the sites hosting the bees.

“To draw attention to these locations and speak to different themes as they would be relevant,” said Habib.

Habib isn’t the only one setting up hives this summer, some are even looking to expand their setup.

“It’s kind of changed our perspective on things and what we plant in our yard and just kind of how we go about our lives,” said Lorie Black, her family started beekeeping last year.

Beekeepers have an important part to play in nature, according to Habib.

“It really allows us to contribute to pollinating our flora, that is really important to us and that is native to our province and specifically to Edmonton,” said Habib.

The pilot project is scheduled to go for three years.

In addition to the aviation museum, hives are also at the Mercer Warehouse, Old Man Nursery, Chancery Hall, The Grierson Centre and the Alberta Hospital Edmonton.