First, Ryan Reynolds made a $4,000 donation to the "Feed Your Friends" campaign.

“I happen to love Edmonton. This donation is in memory of Connor McGrath. Love, Ryan Reynolds,” the Deadpool star wrote.

The fundraising campaign for the food bank was organized in conjunction with 104.9 Virgin Radio to help ensure Edmontonians have the food they need during the pandemic.

Britt Jones told CTV Morning Live Edmonton that he had been trying to personally thank Reynolds for his donation. Jones was able to connect with him via direct message on Friday.

"I just wanted to get you guys to your goal," Reynolds wrote. "So happy to see more and more people have since chipped in. That's a testament to the bottomless kindness Edmontonians possess. I'm not surprised."

Then on Friday afternoon, Edmonton-born actor Nathan Fillion donated $5,000 to the fundraising campaign.

Along with his donation, the Castle star left a message simply reading: "Thank you for all you do. Stay safe."

"It's pretty awesome because people are doing what Ryan Reynolds does," said Carly Kincaid Williams with Edmonton's Food Bank. "We'd like to keep our six feet, two metre distance but we'd like to give him a virtual hug."

This isn’t the first charitable donation Reynolds has made to food banks during the outbreak. He and his wife Blake Lively donated $1 million to Feeding America and Food Banks Canada in March. In a statement posted to the couple’s Twitter accounts, they said it was to support people who had been “brutally impacted” by COVID-19. 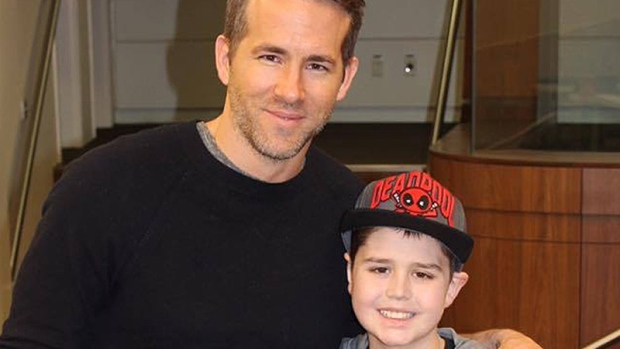 Ryan Reynolds and Connor McGrath in 2016.

You can donate to the Edmonton Food Bank campaign online. The fundraising continues until April 24, 2020.