Inside the Alberta legislature's $22M restoration

EDMONTON -- A project to restore the exterior of the Alberta legislature building is underway.

The sandstone exterior of the 106-year-old building is showing its age.

"It looks great from ground level, but once you get up to the stone, then the deficiencies start to appear," said Rob Pacholok with Building Science Engineering. "We identified over 18,000 deficiencies within the sandstone."

The work will be done in sections over the next two and a half years.

Scaffolding and tarps are covering the southwest corner of the building, where local company Scorpio Masonry is tackling the extremely specialized work.

"There's a kind of pride that we have to take," said president Chris Ambrozic. "This is the most important asset of the province of Alberta."

Crews are using as much of the original material as possible. Everything else is being mined from the same region that the original stone was collected, in the Red Deer and Calgary area.

"It probably would be easier to take it apart and put a new stone in, but because of the historical resource we're trying to salvage as much as we can," Ambrozic explained. 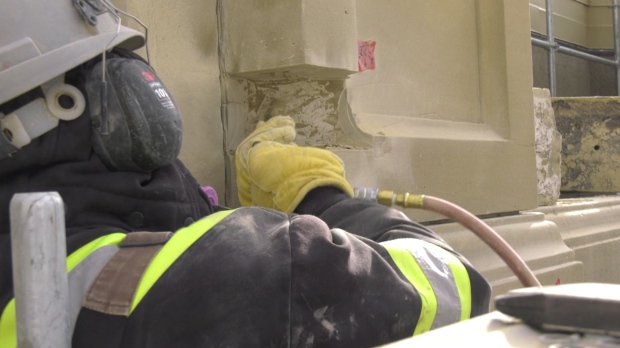 Infrastructure minister Prasad Panda told CTV News Edmonton that extending the life of this piece of Alberta's history is valuable for all Albertans.

"This is our temple of our democracy," Panda said. "It's worth investing in."

The $22-million restoration project is expected to be complete in October 2021.