'It's a day of pride': New military monument unveiled in Morinville

'It's a day of pride': New military monument unveiled in Morinville 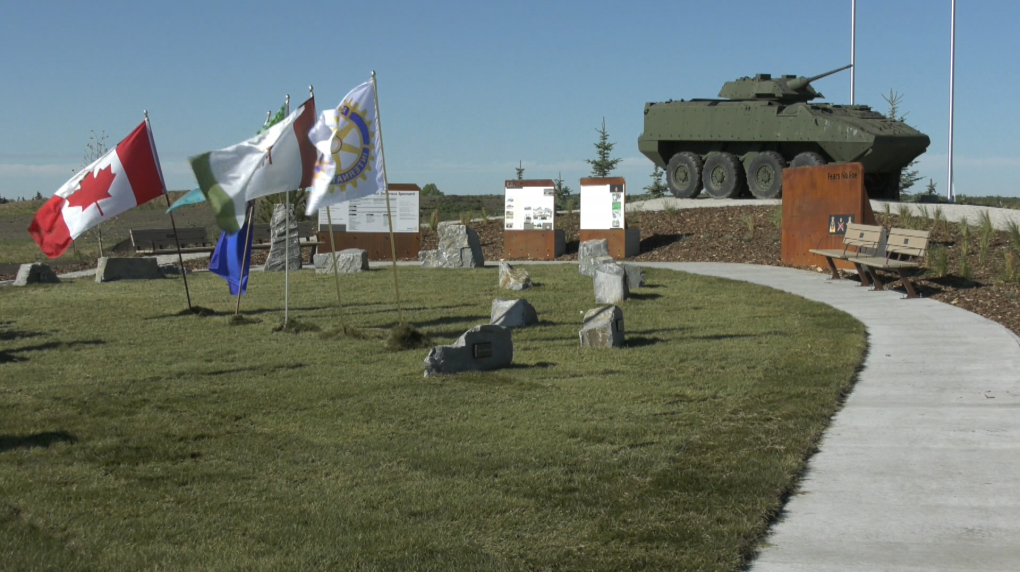 The 408 Tactical Helicopter Squadron flew over Morinville Sunday as a new monument was unveiled in honour of contributions made by the Canadian military.

Originally named the Kodiak, the LAV III is a third-generation light armoured vehicle, which was instrumental in Canadian military operations in Afghanistan.

The monument is made of a decommissioned LAV III hull. It is the last one to be installed in Alberta through the Canada Company LAV III Monument Program, which has ended.

"Today is the culmination of years of hard work," said Gordon Putnam, chairman of the Rotary LAV committee. "I couldn't be happier for the region."

Putnam said the idea was pitched in 2015 by a local military member. It was officially unveiled Sunday as part of the Rotary Club of Morinville's 25th anniversary.

A ceremony was held at 1 p.m. at the site beside the Morinville Leisure Centre, near Highway 642, and the 408 Tactical Helicopter Squadron performed a flypast.

Putnam said the installation is meaningful because Morinville and Sturgeon County have around a 30 per cent population of military members.

"To be able to provide a monument to them and a dedication and tribute is really, it's a day of pride," Putnam said.

"I'm so proud of all the work that's gone in, but also I'm just proud that we have something where we can pay tribute to our Canadian military."

Morocco has looked impressive in Group F but Canada has an opportunity to finish its World Cup experience on a high.

A massive Ontario-wide investigation into child exploitation has led to more than 100 people being charged, police announced on Wednesday.

The largest earthquake ever recorded in Alberta, which rattled homes and nerves Tuesday, was probably due to natural causes, says a geologist.

A Virginia sheriff's deputy posed as a 17-year-old boy online and asked a teenage California girl for nude photos before he drove across the country and killed her mother and grandparents and set fire to their home, authorities said Wednesday.