'It sounded like bombs': Hailstorm damages dozens of cars on Alta. highway

'It sounded like bombs': Hailstorm damages dozens of cars on Alta. highway

Marquez was one of many people trapped in a hail storm on Monday evening near Red Deer, Alta., which left dozens of vehicles damaged and drivers and passengers bruised and confused along the side of the QEII highway.

As the hail pelted down, shattering all the windows, he said he wasn’t sure if he would make it home.

“It was one of those things where I ended up calling my parents,” he adds. “I’m like, ‘I love you guys. I don’t know what’s about to happen.’”

Leaving Calgary the weather was beautiful, Marquez said, and he and his friends started the drive back to Drayton Valley around 5 p.m.

“Creeping up on Red Deer there, the clouds started getting a little fast, a little spinny. It was still sunny though,” Marquez said. “All of a sudden a tornado warning comes in on my phone.”

“Right off the bat, complete change of the sky. Things started moving faster, the sky started getting darker. What made us pull over though, was one ball of hail that was half the size of my head.”

Marquez said things got intense fast. Giant hail pelted the highway, bouncing up like softballs. As they sat thinking of what to do, the windows started to break -- starting with the back where he was sitting.

“Give or take two minutes, all the windows are gone in the vehicle,” he said. “I’m looking at the speed of these balls, and one of them will knock you right out or even kill you, like they were coming in fast.”

As the roof started to crater in, Marquez said he tried to pass up luggage and backpacks for the two in the front to protect themselves the best they could, but it wasn’t enough.

“The most traumatizing little noise was just hearing him getting hit, basically it was like someone punching him in the ribs every couple seconds. You just hear a grunt and a cry every single time.”

Got stuck in the huge hail storm at the bottom of Antler Hill between #reddeer and #Innisfail. Thankfully it’s just the vehicle that got damaged. Crazy stuff to experience though. #abstorm pic.twitter.com/3hLnJDhEK7

Around 30 kilometres south, Matt Berry also found himself under fire from the storm. He was on the way home from a round of golf when he was forced to turn off the road just north of Innisfail.

“I’ve never been in a war, I don’t pretend to know what a war sounds like, but inside the car, it sounded like bombs were hitting the top of my car,” Berry said. “And as my windshield started concaving and smashing, I kind of just ducked and covered.”

The hail storm lasted around 20 minutes, Marquez said, before blowing out and leaving sunshine and a rainbow for the tow trucks, first responders and passersby who quickly arrived on scene.

“There was lots of Good Samaritans ... people who were passing by that obviously didn’t experience the storm itself that were asking if people needed rides,” Berry said. “The fire departments and RCMP were on scene really quickly as well making sure everyone was okay.

“So overall the Alberta community was great at making sure everybody was taken care of.” 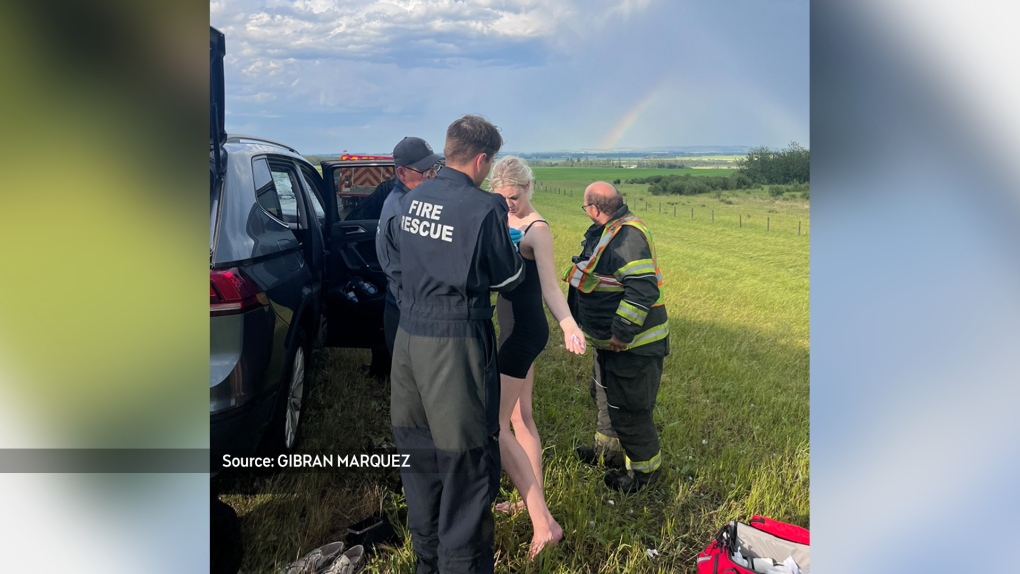 First responders arrived to a rainbow after a massive hail storm damaged cars along the QEII Monday, Aug. 1.

Berry wasn’t hurt, and no major injuries have been reported, but Marquez did suffer a mild concussion and his friend, the driver, is currently being checked for broken ribs. Marquez adds that it’s a scary situation, because there is little anyone can do to protect themselves, and he and Berry both say they’re glad that no one was seriously hurt.

“At the end of the day, a car can be replaced,” Berry said. “There was a lot of us that have lots of damage to our vehicles, but from what I heard, everybody’s okay, so that’s the main thing.”

David Phillips, senior climatologist for Environment Canada, said this kind of weather is to be expected in what he calls the “lazy, hazy, crazy days of summer.”

“The heat is there. At the same time, the crops are growing feverishly, the humidity is higher,” said Phillips. “ So those are the fuels that drive these storms … Kind of stir the kettle.”

Alberta normally would see 12 or 15 tornados a year, Phillips said, so the province is about on track – especially with more warm weather on the way.

“This is just the peak of the season. We still have August to go, and our models are showing that August is going to be warmer than normal,” said Phillips. “So expect a déjà vu of the weather you had on the weekend again.”

In the aftermath of Hurricane Ian, a tight-knit coastal community in Fort Myers is coming to grips with devastation at their doorstep — and is working together to rebuild.

King Charles III has decided not to attend the international climate change summit in Egypt next month, fuelling speculation that the new monarch will have to rein in his environmental activism now that he has ascended the throne.

Police firing tear gas after an Indonesian soccer match in an attempt to stop violence triggered a disastrous crush of fans making a panicked, chaotic run for the exits, leaving at least 125 people dead, most of them trampled upon or suffocated.

How a deadly crush at an Indonesia soccer match unfolded

A soccer match at a stadium in Indonesia has ended in disaster, with at least 125 people killed and more than 320 injured after police sought to quell violence on the pitch, authorities said on Sunday. This is how events unfolded.

Marking one month as a judge on the Supreme Court of Canada, Michelle O'Bonsawin, speaks with Evan Solomon about why she wants people to see her as a judge first and the first Indigenous justice to sit on Canada's highest bench, second.

Laughter lights up the gathering twilight at Langara College in Vancouver, where first-year health science student Jagiit Singh is chatting with friends next to the school's fountain. But his smile fades when he's asked about the cost of living in Canada since moving from India last year.

Hurricane Orlene grew to Category 3 strength on Sunday as it headed toward Mexico's northwest Pacific coast between the tourist towns of Mazatlan and San Blas.