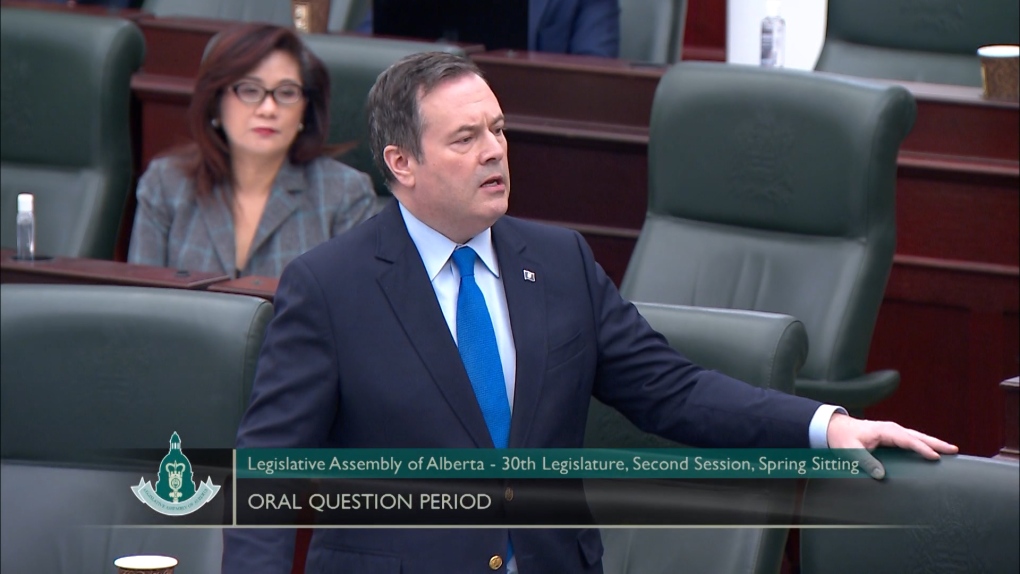 EDMONTON -- Premier Jason Kenney would not say whether he'd maintain Alberta’s $15 per hour general minimum wage in a post-COVID-19 economy when questioned about it in the legislature Wednesday.

Instead, Kenney responded to the question from NDP Leader Rachel Notley by pointing to Alberta’s high unemployment rate and blaming the former NDP government for what he called its "job-killing policies."

“Premier, will you commit to this house today in absolutely uncertain terms that you will not rollback Alberta’s minimum wage below $15 per hour?” Notley asked Kenney.

“I have no idea...again, the NDP, they just invent things out of whole cloth,” Kenney responded. “What we know is this, Mr. Speaker, we are dealing with a real unemployment rate…of something like 25 per cent, that we’ve not seen since the 1930s.

“So the Minister of Finance will be tabling the economic recovery strategy later this month, a bold plan that will do everything in our power to get this economy moving again to protect jobs and livelihoods,” he added.

“We know what that means. This is so wrong and cruel, especially when Albertans are already hurting,” Notley wrote.

Christine Myatt, press secretary for the premier, said she had “nothing to add” to Kenney’s comments when reached by CTV News Edmonton Wednesday night.

After defeating the NDP and winning a majority government, Kenney’s UCP government introduced a youth minimum wage of $13 per hour in June 2019.

On April 20, 2019, days after winning, Kenney tweeted “we will keep the general minimum wage,” in a response to a question on the topic.

On Wednesday in the legislature, Kenney criticized the NDP for policies like the $15 minimum wage.

“Now we went into this already with amongst the highest, one of the highest, levels of unemployment in the country because of the NDP’s job killing policies,” Kenney said.

A spokesperson for Alberta’s Labour and Immigration Ministry also referred CTV News Edmonton back to Kenney’s comments in the legislature.