Lingerie at the Legislature: Edmontonians strip down for body positivity 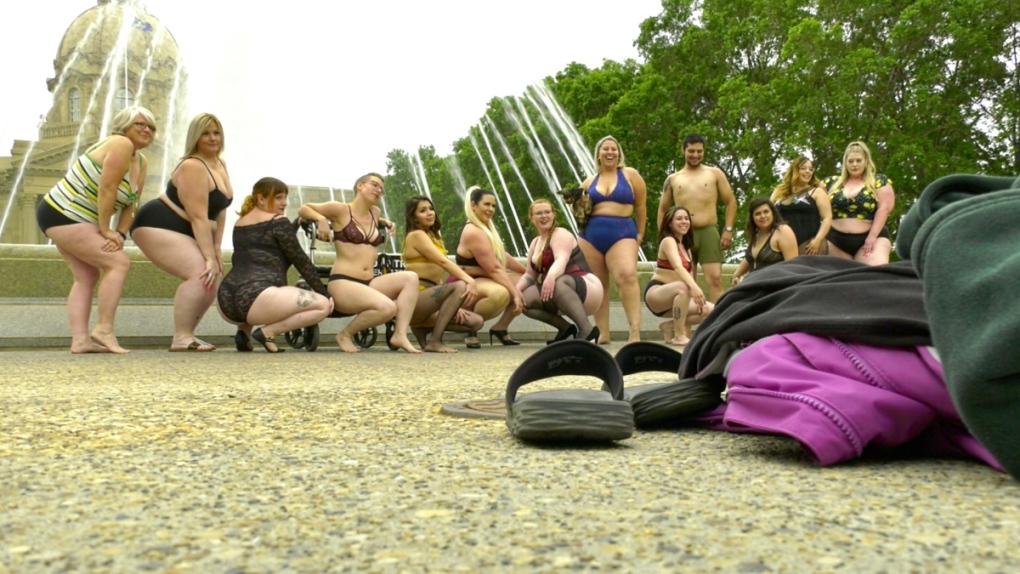 Thirteen people posed for photos in their underwear at the Alberta legislature to show they are comfortable with their bodies.

Kayla Logan once told her family she’d rather be dead than fat.

About a year ago, the Toronto area blogger gained 130 pounds, and she hated her new self.

“I was taking laxatives by the bottle, I was purging, I was starving myself, I was working out way too much,” Logan told CTV News Edmonton Thursday night.

Logan went on to lose 20 pounds, but found she didn’t feel any better about herself. Then she watched a documentary called 'Straight/Curve,' and had a revelation.

On Thursday, Logan took off her clothes, stood in her underwear, and posed for photos at the Alberta Legislature. And she wasn’t alone. Twelve local women and one man joined her. Wearing underwear, swimsuits or lingerie, they got in the legislature fountain and posed on the steps as families walked by.

Logan says the reactions have been mixed. Some bystanders cheer them on, others insist they cover up. But for her, it’s not just about self-love, but also showing others it’s OK to love their imperfect bodies.

“Dropping down to my skivvies gave me confidence and that’s why I’m doing this,” she said.

Logan is now making her way across Canada on a self-funded journey, taking off her clothes at landmarks along the way, and posting the photos on Instagram.

Thirty people joined her in going nearly nude at the Canadian Museum for Human Rights in Winnipeg and 11 more stripped down at Victoria Park in London, Ont. Most of her fans have found her through body positive social media accounts, and anyone is welcome to pose, regardless of body type.

Raffela Mancuso had never done a near-nude body positive event before Thursday, but she was happy to join in and talk about it in hopes it might make others feel better about themselves too.

“You don’t have to love your body. You just don’t have to hate it,” Mancuso said while wearing a lace swimsuit on the Legislature steps. “So when people see this, they’ll think, 'My body kind of looks like hers. And maybe that’s OK.'"

Logan is heading to Vancouver, Seattle, and Portland to organize similar events. Her journey can be tracked @kaylaloganblog on Instagram.