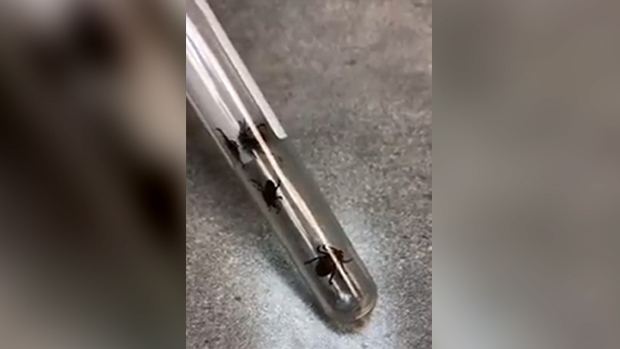 Several ticks were taken from a dog in the Spruce Grove, Alta area on January 9, 2019. (COURTESY: DEVONIAN VETERINARY CLINIC)

An Alberta veterinary clinic is reminding animal owners that their pets can still pick up ticks, despite the cold temperatures.

The Devonian Veterinary Clinic says the removed several ticks from a dog on January 9 after it had been in the Spruce Grover river valley area.

An employee at the clinic says it’s a common misconception that ticks aren’t an issue in the winter months.

The insects hibernate instead of dying off over the winter. Temperatures of +4 or above will often cause the bugs to become active again.

During hibernation periods, they can still be found in underbrush or other sheltered areas, and animals that may come in contact with those areas like farm dogs can be prone to picking them up.

The clinic is sending the ticks found this week to a lab for testing.