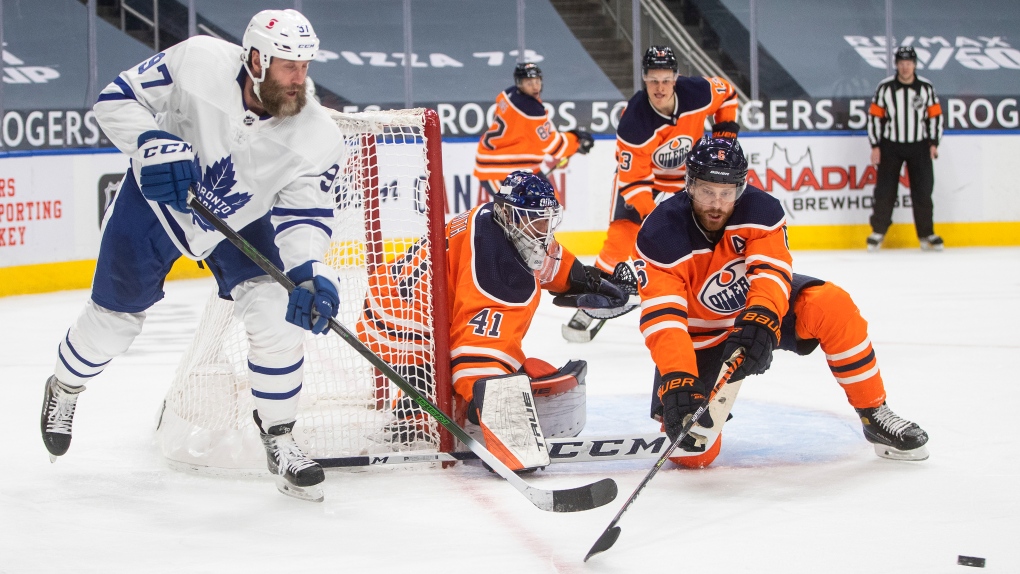 EDMONTON -- For the second game in a row, the Toronto Maple Leafs found ways to shutdown two of the NHL's top scorers on Monday.

And once again, they accomplished the feat without some of their top talent.

With marquee centre Auston Matthews and starting goalie Frederik Andersen both out of the lineup with injuries, the Leafs (14-9-0) blanked the Edmonton Oilers 3-0 Monday.

The entire Leafs roster has stepped up as the team deals with a wave of injuries, coach Sheldon Keefe said after the win.

“That's been really healthy for us to see,” he said. “Obviously we want to get our people back here, obviously we're a stronger group when we're healthy. But it's a very good sign that you can still get a win, especially here on the road against a very good team.”

Morgan Rielly and William Nylander had a goal and an assist apiece Monday, while Zach Hyman also scored for the NHL's top team.

Goalie Michael Hutchinson was key to the victory, stopping 31 shots for his sixth career shutout.

When the Leafs had breakdowns, Hutchinson was there to bail them out, Keefe said.

“It just felt like one of those nights, the way he was moving in the net and the saves he was making, it at least gave me on the bench the confidence that they were going to have to do a lot to score one tonight,” he said. “He was terrific. It was fun to watch him out there.”

Hutchinson was on the bench Saturday when Jack Campbell backstopped the Leafs to a 4-0 victory over the Oilers.

“It was a lot of fun watching (Campbell) get the shutout last game, coming off an injury like he did,” he said. “And for myself, I thought the guys battled great in front of me all night tonight and made my job as easy as possible.”

Oilers forward Ryan Nugent-Hopkins said his team's offence was better on Monday than it had been on the weekend, despite the final score.

“We couldn't find a way to crack them for that first one and get rolling and get that confidence back,” he said. “But I mean, we've got to stay confident. We were rolling before this, it's a bit of a blip on the radar. It happens.”

Edmonton had issues at both ends of the ice Monday.

Toronto scored on its first shot of the game when Rielly put a pass on Hyman's tape and the forward sent a nifty backhanded shot past Mikko Koskinen to give the Leafs a 1-0 lead.

Three minutes later, Nylander collected the puck off a faceoff and streaked deep into the Edmonton zone. He sailed a backhander over Koskinen's glove and into the top-left corner of the net.

A power-play strike rounded out the first-period scoring after Edmonton's Adam Larsson was called for hooking.

Rielly uncorked a blast from near the blue line and, while Koskinen got a piece of it, he couldn't control the puck and it dribbled through his legs and over the goal line, giving Toronto a 3-0 lead heading into the first intermission.

Koskinen allowed three goals on 10 shots before being replaced by Mike Smith to start the second period. Smith had 13 saves in relief.

“We're in a little rut,” he said. “Teams get in a little bit of a rut. It seems like nothing you're shooting's going in the net. You know, point shots, deflections, you can usually find one or two of those in a few games. But they're not going in for us right now.”

Keeping Connor McDavid and Leon Draisaitl - the league's No. 1 and No. 3 scorer, respectively - from finding the back of the net is no easy feat.

The key to stopping Edmonton's offence on Monday was not giving their top players time and space, and limiting odd-man rushes, Hutchinson said.

Still, the 31-year-old netminder had to stop a speedy McDavid in the third to keep his shutout in tact.

“You don't have a lot of time to really think when (McDavid's) coming down,” Hutchinson said. “You kind of just see that he has the opportunity to get a chance and from there, it's all about just trying to react and hope that you're able to make the save.”

His performance Monday comes during Hutchinson's second stint in Toronto.

The Leafs traded him to the Colorado Avalanche at the deadline last year and he went on to stun many in the playoffs, posting a .910 save percentage over four games.

He rejoined the Leafs in free agency.

Hutchinson's journey is a testament to his character, Hyman said.

“I think it's just about battling and it shows the type of person he is, to not give up and to fight through adversity,” he said. “You don't do that without having a strong mental game and just believing in yourself.”

The Leafs and Oilers will wrap up a three-game series in Edmonton on Wednesday.

NOTES: Keefe said Matthews is still “day-to-day” with a wrist injury. â€¦ Earlier on Monday, the Oilers claimed goalie Alex Stalock off waivers from the Minnesota Wild. â€¦ Toronto defenceman Jake Muzzin played in the 600th game of his NHL career. â€¦ The Leafs have never lost at Edmonton's Rogers Place during regulation.

This report by The Canadian Press was first published Mar. 1, 2021.