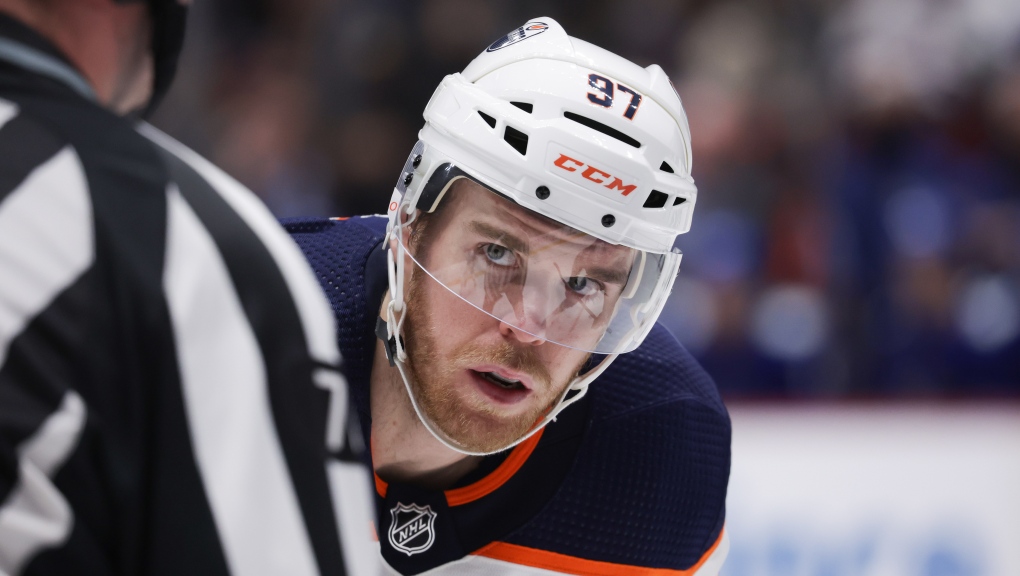 Edmonton Oilers' Connor McDavid lines up for a faceoff against the Vancouver Canucks during the third period of an NHL hockey game in Vancouver, on Tuesday, January 25, 2022. THE CANADIAN PRESS/Darryl Dyck

Connor McDavid snapped his goal-less drought Tuesday - and he did it in spectacular fashion.

With just 23.4 seconds left in overtime, the Edmonton Oilers captain tapped in a Darnell Nurse pass from the top of the crease to secure a 3-2 comeback win over the Vancouver Canucks.

It was the superstar centre's 20th goal of the season and his first in six games.

“I've been a bit snake bit,” McDavid said. “I feel like I'm getting my chances but I haven't been able to put one away, so it was nice to be able to contribute and find a way to score a goal.”

Edmonton (20-16-2) dominated the shot clock but struggled to get pucks past Vancouver goalie Spencer Martin.

The 26-year-old netminder stopped 47 shots in just his second NHL game of the season and fifth of his career. He was pressed into action after both Canucks all-star Thatcher Demko and backup Jaroslav Halak were added to the NHL's COVID-19 protocol.

Martin may not be a household name, but McDavid said he remembered the native of Oakville, Ont., from playing against him in both the Greater Toronto Hockey League and junior hockey.

“He was kind of one of those guys where you're just waiting for him to make it to the NHL and for goalies it takes a little while longer,” McDavid said. “And it seems like he needed a bit of a break and with the COVID bug going around it seemed like that's kind of his break and he's played well. He's played really well.”

Mikko Koskinen had 25 saves for the Oilers, who've now won back-to-back games for the first time since Dec. 18.

Ryan McLeod finally got Edmonton on the board midway through the third period and Leon Draisaitl added another goal to tie score 2-2.

“Not ideal, but it's nice that we find ways to come back,” Oilers head coach Dave Tippett said of the comeback. “That shows a lot of will on our team.”

Tyler Motte, with a short-handed tally, and Elias Pettersson scored for Vancouver (18-19-5).

Draisaitl nearly ended the game earlier in overtime, slipping around Brock Boeser near the boards and getting a clean shot off from in tight but Martin was there to make the stop.

The German sniper forced extra time, evening the score 10:24 into the third. He blasted a one-timer past Martin for his 29th goal of the season.

The Oilers came into the game boasting the league's best power play (30.5 per cent) but were 0-for-3 with the man advantage. The Canucks came in with the worst penalty kill in the NHL (67 per cent) and were scoreless on their lone power play.

“They've worked hard at it, they want to get better at it,” he said. “And we told them today that the first half is over, let's forget about it, let's start worrying about the second half and see how we can be there.

“And they rose to the occasion and did a good job penalty killing.”

Edmonton got on the board 6:33 into the third when McLeod unleashed a rocket from the bottom of the faceoff circle and his shot found a bit of space between Martin and the post.

“Earlier in the shift, I kind of had a chance to shoot and I tried to make a pass and they've been telling me to shoot the puck more so I was coming down the wing and just thought I'd put one on net and luckily it squeaked through,” McLeod said.

The goal, his fifth of the season, prompted cheers of “Let's go Oilers!” from the Edmonton fans littered around Rogers Arena.

A crucial block led to Vancouver's second goal of the night.

With Juho Lahmmikko in the penalty box for holding Draisaitl, the Canucks were tasked with shutting down the Oilers' potent power play.

Miller used his stick to deny McDavid's shot, then picked up the puck and skated into the neutral zone, where he dished it off to Motte. Motte amped up his speed for a short-handed breakaway, then slid a shot under Koskinen's right pad to give Vancouver a 2-0 lead 17:13 into the second.

Motte got a similar breakaway during a Oilers power play midway through the final frame but Koskinen wasn't about to be beaten again. The Finnish netminder threw his legs out to make the stop, sprawling across the net.

“I think I had a little bit more time (on the second breakaway), probably could have taken in to the back hand but sometimes you're not trying to overthink it. It worked once, you try to do it again,” Motte said. “But it could have been the difference and it could have helped us win. But it doesn't always go in.”

Both sides were down a man earlier in the period when Pettersson opened the scoring.

McDavid had been called for interference on Matthew Highmore and Highmore for embellishment after he dropped to the ice in dramatic fashion.

Draisaitl nearly put Edmonton on the board during the ensuing four-on-four, but Martin stopped the powerful blast with his shoulder.

Moments later, Pettersson ripped a shot from the top of the faceoff circle, clanking it off the far post and in for his 10th goal of the season.

Edmonton seemed poised to open the scoring earlier in the frame when Yamamoto sent a laser careening toward the Vancouver net only to see the puck ping off both the post and crossbar.

The Canucks face the Jets in Winnipeg on Thursday to kick off a four-game road trip. The Oilers host the Nashville Predators the same night.

This report by The Canadian Press was first published Jan. 25, 2022.

Fourth-grade teacher Irma Garcia was killed in her Texas classroom on Tuesday, massacred along with her co-teacher and 19 students. Two days later, a family member says her brokenhearted husband died.

The gunman who massacred 19 children and two teachers at a Texas elementary school was inside for more than an hour before he was killed in a shootout, law enforcement authorities said Thursday amid mounting public anger and scrutiny over their response to the rampage.

The Edmonton Oilers defeated their Alberta rival Calgary Flames 5-4 in overtime in Game 5 of their second-round NHL playoff series Thursday night to advance to the Western Conference final.

A 10-year-old boy in a classroom just down the hallway from the room where a gunman killed 19 children and two teachers in Uvalde, Texas on Tuesday said the experience of hiding during the shooting was 'terrifying.'

In the wake of a horrific mass shooting at an elementary school in Texas, Prime Minister Justin Trudeau has signalled that the Canadian government will be moving ahead on new gun-control measures 'in the coming weeks.' In previous Parliaments, the Liberals have made changes to Canada's gun laws, but in the 2021 federal election, Trudeau promised to go further.

A massive Russian plane that was grounded at Toronto Pearson International Airport back in February is racking up a substantial parking bill.

Monkeypox cases up to 26; first case detected in Ontario: PHAC

There are now 26 confirmed cases of monkeypox in Canada, according to an update from the Public Health Agency of Canada, and the virus has been detected in a new province, with one case in Ontario.

Canada's job vacancies are at a record high