EDMONTON -- An apple for his time as a teacher, Neapolitan as a nod to his favourite ice cream and a chewy caramel dressed in camouflage described as 'Tough, like the soldier George was.'

These are all flavours in a special collection of chocolates made in honour of Sherwood Park's Sgt. George Miok.

Miok was killed by an IED in Afghanistan in 2009.

"He's more than a soldier," George's brother John Miok told CTV News Edmonton. "So many people came together to make this work. I'm very proud of it."

George's family and friends collaborated with Jacqueline Jacek of Jacek Chocolate Couture to create this collection of chocolates in his name and to coincide with Remembrance Day.

"I think it's really important that we remember those serving right now and those that have lost their lives in service, and to remember George, who was a part of our community, and never to forget," Jacek said.

She and her team created 200 boxes of the special chocolates, hoping to sell them all before Remembrance Day.

They sold out in 20 hours, raising $4,000 to donate towards the memorial scholarship that was set up in his name.

We launched a campaign last week in memory of a local fallen hero, Sgt. George Miok. Our goal was to raise $4,000 for youth in our community. In 20 hours, our goal was met. A huge thank you to everyone for your support. Lest we forget. Rest well, solider ❤️ pic.twitter.com/0l9w0SIykH

George's brother is proud of what Jacek created, and thinks his brother would have loved it too.

"Each chocolate is a little representation of George and his life," John said. "This is something that for sure he would be super proud of and I'm glad his name is all over this."

There are plans to repeat this commemoration next year. 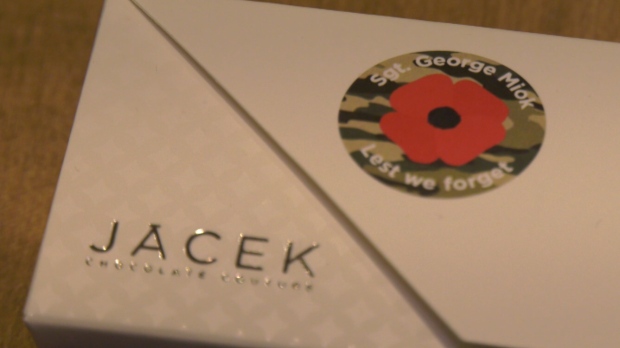