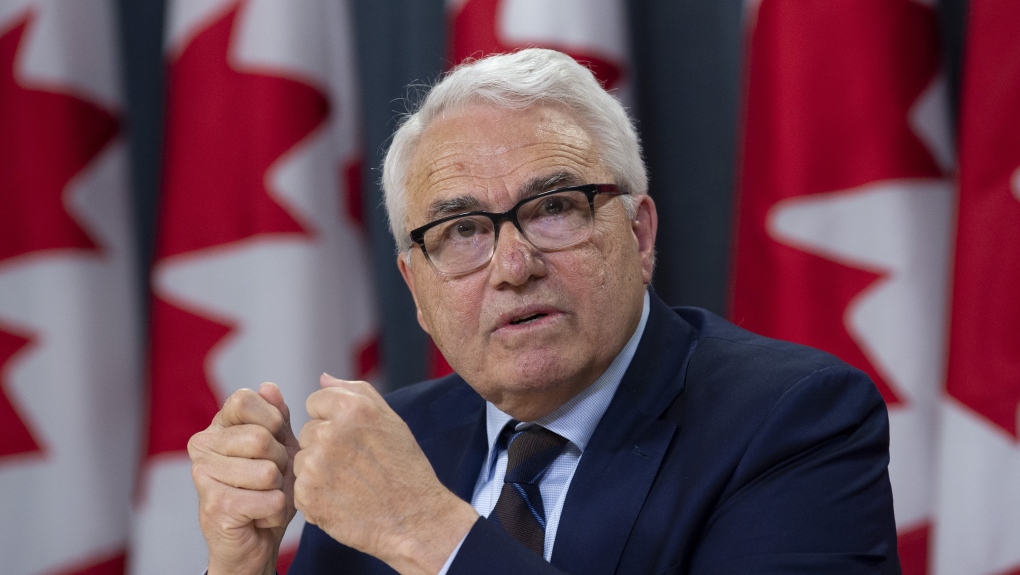 Official Languages Commissioner Raymond Théberge responds to a question during a news conference in Ottawa, Thursday May 9, 2019. THE CANADIAN PRESS/Adrian Wyld

Canada's official languages commissioner has written to Alberta’s justice minister expressing concern over the future of French-language policing should the province create its own provincial police service.

The apprehension is outlined in a January 2022 briefing note to the Commissioner of Official Languages of Canada Raymond Théberge.

“If Alberta creates its own provincial police service, the Royal Canadian Mounted Police (RCMP) would be replaced by a police force that will no longer have the obligation to offer services in French,” the note reads.

“We suggest you send a letter to the minister of justice of Alberta to bring this issue to his attention.”

The document was obtained by CTV News via an access to information request.Théberge’s office confirms the letter was sent on Jan. 20, 2022.

“I am concerned that French language services to Albertans could be adversely affected,” he wrote in an email in response to further questions from CTV News.

Théberge pointed to his 2020 report on the impact of emergency situations on official languages that highlighted “the crucial importance of communicating with Canadians in their first official language during emergency situations which often involve police forces, in order to inform them, reassure them and give them instructions that they can understand and carry out.”

The office of Alberta Justice Minister Tyler Shandro confirmed it received the letter, and pointed to ongoing bilingual consultations with the Association Canadienne-Française de l’Alberta (ACFA).

A spokesperson says no decisions have been made regarding an Alberta police service.

“A guiding principle of this exercise has been to see if we can create a made-in-Alberta policing model that is more responsive to the needs of Albertans and reflects the values of our many communities – and that includes Alberta’s francophones.”

In June of 2014, the province implemented its French Policy that “acknowledges the past, present and continued social, cultural and economic contributions of the province’s significant and diverse French-speaking population.”

The most recent census data indicates Alberta has the fourth-largest French-speaking population of all provinces, with more than 268,000 being able to speak the language, nearly 80,000 using it as their first language, and close to 4,000 residents having a knowledge of only French.

The ACFA notes that French and English are the only languages in Alberta with a recognized status by policy and that French-English bilingualism in the province grew by more than 30 per cent between 2001 and 2016.

But francophone Albertans say getting services in French can be challenging.

“It’s a joke,” said Mario Dubé, a New Brunswick-born French-speaking Albertan who has lived in the province for 40 years.

“If you don’t speak English, ‘get out of here’, that’s what you get,” he told CTV News in an interview.

Dubé, who says he struggles to express himself in English, claims to have had trouble communicating in French to pay his local taxes, renew his licence, represent himself in court and communicate with the Canada Revenue Agency.

Last June, he was awarded more than $22,000 dollars in damages by an Alberta Court of Queen’s Bench judge after a combined RCMP-Edmonton Police Service traffic stop near Beaumont in 2006.

The ruling outlines how Dubé was bloodied when an officer shattered the window of the truck he was driving after he didn’t answer an officer’s queries in English.

“Despite the fact that the checkstop was just outside Beaumont, a bilingual community, no attempt was made to determine if a French speaking officer was present, to see if one was available over the radio, or to get an interpreter on the scene in person or by phone,” the ruling reads.

The judge’s ruling notes the officers “punished” Dubé for speaking French and that one officer “made offensive comments and tried to persuade him to speak English” after he was arrested.

"We should have people that speak both languages,” Dubé said. “I knew I did nothing wrong.”

The idea of an Alberta provincial police service was first put forward in 2004, but the province elected to renew its contract with the RCMP.

The concept was brought up again after the United Conservative Party was elected in April of 2019.

A government-commissioned study, published on Oct. 29 of last year, showed while a new police service could result in $49 million in savings, a $170 million federal subsidy could also be lost if the RCMP are pushed out.

Consultation with stakeholders and the public regarding that report and a potential shift away from the Mounties is scheduled to conclude on April 1.

Théberge notes the study “does not seem to have taken into consideration the issues related to the availability of French language services.”

He says it’s too soon to comment on the impact of French-language policing in Surrey, B.C., where the city is creating its own police service and is expected to drop the RCMP by the end of the year.

In a statement, the RCMP says it is of “fundamental importance to provide policing service to Canadians to the extent possible in the language of their choice.”

It says about one in five of its regular members are English-French bilingual across Canada, including 329 working in Alberta, or about nine per cent.

The EPS says it does not have a second-language requirement for officers and that 82 out of approximately 1,780 sworn members, as well as 17 civilian employees and seven volunteers, self-identified as being able to work in French.

“Our police officers are trained in language rights and are well-versed in the organisational tools available to each of them to implement those language rights,” reads an EPS statement.

Alberta’s contract with the RCMP ends in 2032.

With files from Timm Bruch

An Ottawa criminologist says questions about whether political pressure was placed on the RCMP commissioner in the Nova Scotia shooting investigation illustrate why Brenda Lucki should not report to the public safety minister.