Oilers' unvaccinated Archibald out 'until he can get up to speed': Dave Tippett 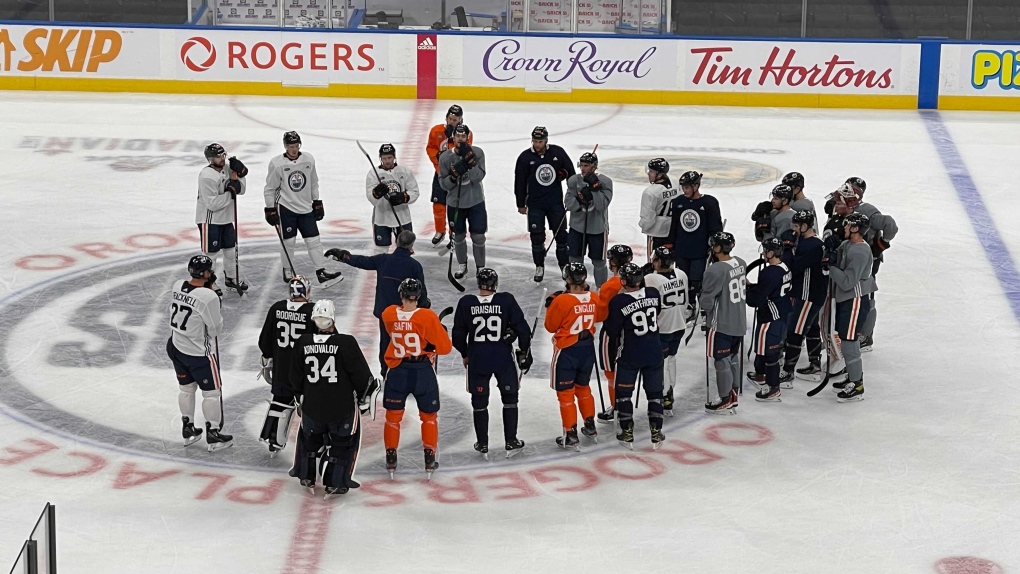 The Edmonton Oilers took to the ice at Rogers Place on Thursday, Sept. 23 for the team's first official skate ahead of the 2021-22 season. (Sean McClune/CTV News Edmonton)
EDMONTON -

When the Edmonton Oilers took to the ice at Rogers Place on Thursday for the first official team skate ahead of the 2021-22 NHL season, there was one player conspicuously absent.

Oilers forward Josh Archibald made headlines on Wednesday when it was revealed by general manager Ken Holland that he remained unvaccinated against COVID-19.

On Thursday, the 28-year-old winger was left off the list for the Oilers team skate.

When asked about Archibald's status on Thursday, Oilers head coach Dave Tippett said the forward "just came out of a 14-day quarantine."

"No skating, no nothing, so until he can get up to speed with where the group is, he won't be with the main group."

"The vaccine has become such a political thing," he told reporters. "It's something a lot more than just a vaccine at this point."

"Obviously we want to do our best to protect one another, but ultimately it's everyone's choice to take it or not."

Archibald is the only member of the Edmonton Oilers who has not received a COVID-19 vaccine.

"It's everyone's choice to take it or not," said McDavid. "Everyone's responsible and has a choice and control of their own body and if someone feels the need not to get it, or doesn't want to get it, that’s their choice and you move on."

The topic was vehemently avoided on Thursday by Oilers goalie Mike Smith.

"Way above my paygrade," the veteran goaltender said when asked about the vaccination status of his teammates.

"I'm not going to talk about vaccinations, COVID. I want to talk about hockey… There's doctors that are way more knowledgeable about it than I am."

'BITTER TASTE IN MY MOUTH'

At 39 years old, Smith's chances of taking home a Stanley Cup are dwindling.

On Thursday, the Kingston, Ont., native said his team's Round 1 defeat at the hands of the Winnipeg Jets served as motivation for him to do better this season.

"There was definitely a bitter taste in my mouth," said Smith. "I proved to myself that I could play at a high level at my age."

"It kind of gave me the drive to keep going."

The Jets swept the Oilers before moving on to Round 2.

After signing a two-year, US$4.4-million extension with the Oilers over the summer, Smith is expected to edge fellow veteran goaltender Mikko Koskinen for playing time in the upcoming season.

EVAN BOUCHARD 'CARRIES HIMSELF LIKE AN NHL PLAYER NOW'

As one Edmonton Oilers' playing career draws near its end, another's is just beginning.

With 21 career NHL games under his belt, the Oilers' 2018 first round draft pick, Evan Bouchard, still doesn't have much experience at the top level.

When asked about the 21-year-old defenceman on Thursday, Tippett's assessment of the young player was optimistic.

"He went over in Europe, played half a year. Continued to play, continued to grow, mature as a player," said Tippett. "He came back and probably didn't play as much as he'd like to play, but every day he was working with our group."

Tippett said the 2018 10th overall pick has been spending extra time in practice and attends every meeting.

"He understands what we're doing as a team," said Tippett. "This year, the difference that I see in him, he's gone from being a young player to he looks like a man… He carries himself like an NHL player now."

When asked about his previous NHL season, during which he played in only 14 games, Bouchard called it a "learning experience."

"Now having the opportunity to slot in. It's going to be a big camp for me and I'm going to show what I can do.

The young player said training with fellow Oilers' defenceman Darnell Nurse on smaller ice surfaces over the offseason was a good opportunity to get better.

"(Nurse) is one of the hardest working guys I know," said Bouchard.

"Getting the opportunity to skate with him, see how hard he works, and I think being on the smaller ice was good for the two of us being a bit bigger, you know, really working on your quick feet and get into the smaller zones really helps a lot."

For Bouchard, the hope is that hard work pays off going into this season.

"We're going to give him a great opportunity," said Tippett. "We need him to take a step forward for us and I have full confidence that he's going to do that."

The Oilers next big test will be against the Calgary Flames when they faceoff for their first pre-season game on Sunday.

Tensions were high in India's western Udaipur city Wednesday, a day after police arrested two Muslim men accused of slitting a Hindu tailor's throat in a brutal attack that highlights a dramatic escalation of communal violence in a country riven by deep religious polarization.