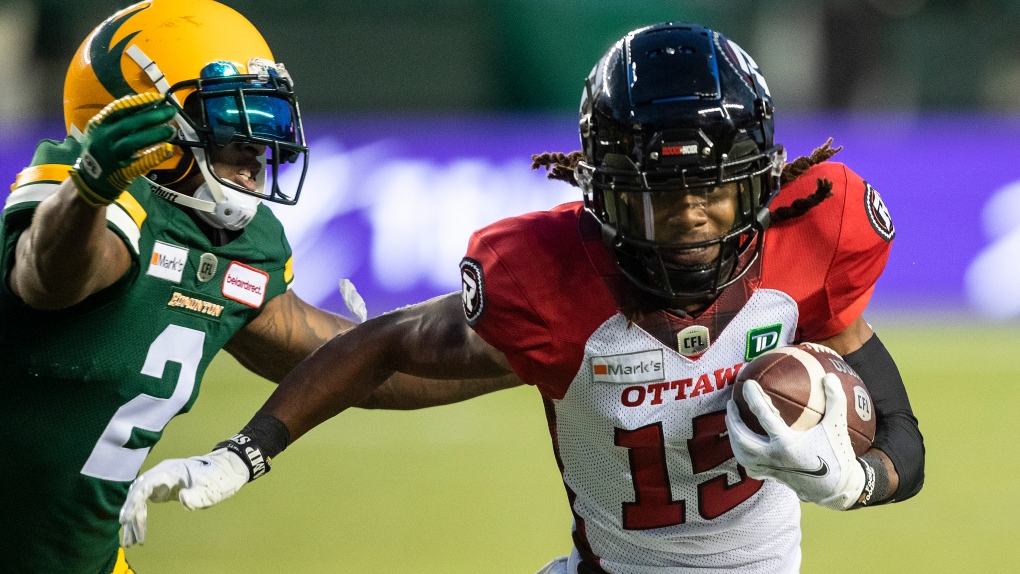 The secondary was first rate for the Ottawa Redblacks on Saturday as they made a pretty good start of exorcising the demons from their three-win campaign in 2019.

Abdul Kanneh had a 102-yard interception return - one of a pair of picks on the night - as the Redblacks spoiled the start of the new Elks era in Edmonton, emerging with a season-opening 16-12 road victory that included stopping the home side on a final drive at the one-yard line.

The first - and turned out to be the only - major score of the game came five minutes into the fourth quarter courtesy of the Redblacks defence, as a pass from Elks QB Trevor Harris bounced out of the hands of receiver Shai Ross and into the arms of Ottawa's Kanneh, who blazed almost the length of the field in the other direction for the winning touchdown.

“It was a huge team win. Everyone did what they needed to do at certain parts of the game. Obviously our defence played outstanding,” said quarterback Matt Nichols, who completed 12-of-20 passes for 71 yards for Ottawa (1-0).

“We have some work to do, but we are going to enjoy this 1-0. It is going to be ugly sometimes. We are happy to get this one out of the way after the two years of not playing football.”

Harris took the loss on his own shoulders after throwing three interceptions in the second half.

“This loss is nothing but my fault,” he said. “The finger needs to be pointed right at me. The defence was stout, we were able to run the ball, I just turned the ball over three times and I can't do that. This loss is on me.”

The Elks (0-1) got on the scoreboard first, recording a 12-yard Sean Whyte field goal just over five minutes in. Ottawa responded with a 52-yard Lewis Ward field goal late in the opening frame.

The Redblacks looked to have surged into the lead on a trick play early in the second when punt returner DeVonte Dedmon lateralled across the field to Ryan Davis and he made a lengthy run into the end zone. But the play was deemed to have been a forward pass and called back.

The teams traded field goals before Whyte nailed a 47-yarder as time expired to make it 9-6 at the half.

Edmonton continued the field goal parade with a 42-yarder five minutes into the third.

Edmonton was pressing with three minutes left, but again the Redblacks secondary was clutch as Harris was picked off at the 22-yard line by Randall Evans.

The Elks came very close to winning the game on a long drive in the dying seconds as fullback James Tuck was stopped on the one-yard line as time expired.

“That stand at the end of the game was outstanding,” said Ottawa coach Paul LaPolice. “I am just proud of these guys, coming out west for a later game with all of the adversity. But they just found a way to win the football game.”

“They had the opportunity to win the game for us and they did what they had been doing all night, they got that final stop for us and got us a big dramatic victory,” Nichols added.

The announced attendance at Commonwealth Stadium was 30,302.

The Elks remain at home next Saturday when they welcome the Montreal Alouettes to town. The Redblacks have a bye week before heading to Regina to face the Roughriders on Aug. 21.

This report by The Canadian Press was first published Aug. 7, 2021.