EDMONTON -- Soon after CTV News Edmonton aired a story about a local wood carver who had one of his carvings stolen, he got a knock on his door.

“They came up and said ‘Ryan Wispinski?’ and he said ‘we got good news’ and so yeah, they had the carving,” said artist Ryan Wispinski.

“I was a little bit suspicious, it’s hard not to be and I got to talking to them and I guess I was just unprepared for it to show up so soon. I had kind of thought I’d never see it to be honest,” he added.

The folk-style piece was taken from behind Wispinski’s home in the Parkallen neighbourhood last weekend.

“The thief had gotten tired and thrown it over the hedge in their yard so they found it in the morning,” he said.

The couple who found it in their yard told Wispinski it was wrapped in a garbage bag.

“He thought it was just some garbage in the bag and he went to pick it up and saw the end of a log and he took the bag off and then they saw this carving,” said Wispinski. 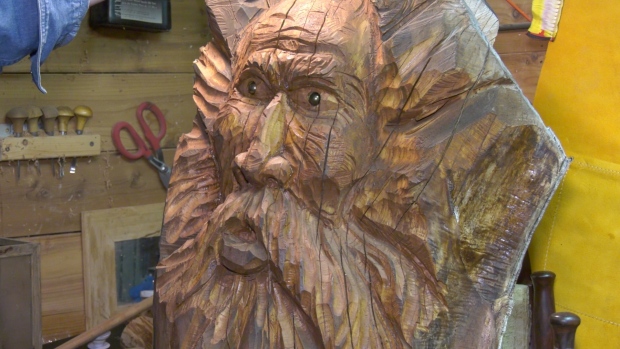 He says the couple didn’t know where it came from and decided they would hang onto it.

”They kind of fell in love with him and they named him Frank,” he chuckled.

“They heard the news, they heard wood-carving and they turned it on and they saw Frank and so they tracked me down. It made my day.”

Wispinski says the other bright spot through the whole ordeal was the support he received from the community. 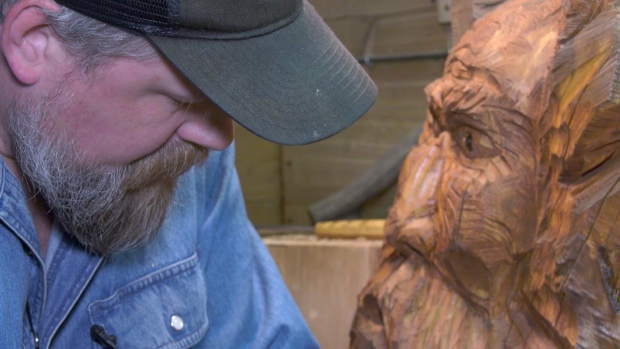 He has schizophrenia, using his carving not only as a form of therapy, but a way to try to break the stigma associated with his illness.

“Popular culture and movies and that really portray people with schizophrenia really frighteningly,” he said, adding “I’ve always been afraid of how people would react to me and so the amount of compassion and trust of and friendship my community shares with me, I said carving was my medicine, well this community is my medicine too.”

Although Wispinski is happy to have the carving back in his shop, it won’t be there long.

The couple has since offered to buy the carving now known as ‘Frank’.