EDMONTON -- The president of Edmonton's police union says he has several safety concerns about the temporary shelter setup inside the Edmonton Convention Centre (ECC), calling it "problematic" and "very draining" for first responders.

On Tuesday, an arrest inside the building turned violent after a man allegedly fled the scene of a stabbing near the Central LRT Station and entered the ECC.

When two officers tried to arrest the man inside they were surrounded by onlookers, according to Edmonton police. A scuffle ensued and two men were ultimately arrested.

The EPA president says the mob mentality those officers faced that day was bad enough, but when paired with radio dead zones inside the building that can make it difficult to call for backup, it could have been a lot worse.

"Having multiple objects being thrown at you, one, that’s scary enough within itself, two, knowing that your radio transmission is not getting through for help," he said. " They were forced into an area where they had a difficult time trying to retreat for safety."

No officers were hurt in the incident.

The space, which can handle up to 300 people at a time, is now known as the Tipinawâw shelter. It opened its doors to Edmonton's vulnerable population in October in response to the COVID-19 pandemic.

Since then, Elliot says officers have made routine visits for a multitude of calls.

Edmonton police were dispatched to the ECC 449 times between Nov. 1 and March 7, according to EPS spokesperson Carolin Maran.

Firefighters and paramedics are also frequently called in and when that happens they're often accompanied by police.

"Fire and EMS don’t necessarily have the tools with them to ensure their safety," said Elliott. 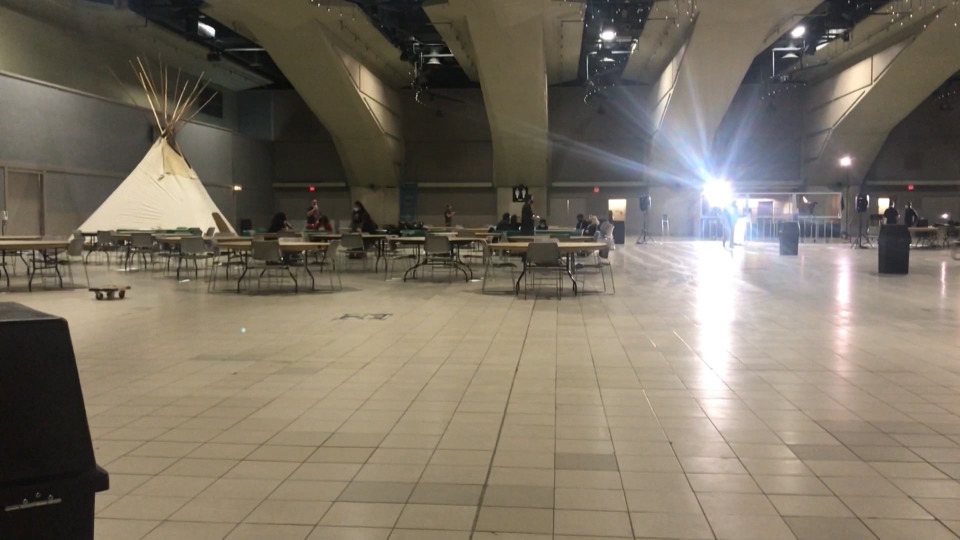 Between Nov. 1 and March 1, Edmonton Fire Rescue Services were called to the ECC 179 times. All but 10 of those calls were for medical emergencies.

Another issue, according to Elliott, is the potential for weapons inside the shelter.

He says people are allowed to walk in and out without being checked which can create dangerous situations.

"That's a concern, not only for police officers, but for EMS, firefighters, security, personnel working inside, maintenance. That's a concern for everyone actually."

On Thursday, Edmonton city council voted to extend the operation of the Tipinawâw shelter inside the ECC from the end of March until the end of April.

During that meeting, Mayor Don Iveson acknowledged the complex challenges first responders and other workers have faced at the ECC since the Tipinawâw shelter opened.

"I think by and large, the agencies, the security staff and police and AHS and EMS and everybody else have done a great job under really, really challenging circumstances."

Deputy city manager Rob Smyth said security at the shelter has been increased.

"There certainly is a lot of activity to make sure that people who are staying there are safe, but then importantly that it doesn’t cascade out of the facility when there are issues in the community."

Still, with the shelter now staying open for an extra month, Elliott says more needs to be done to make it safer for first responders.

"The convention centre is continuing on with the same pattern of behaviour and from our perspective we don't see any steps taken to improve."

The Bissell Centre issued the following statement on the shelter on Friday evening:

“Operating agencies of Tipinawaw – the temporary accommodation located at the Edmonton Convention Centre – confirm that EPS responded to an incident this past Tuesday. This incident was not usual to the operations of the shelter," said spokesperson Scarlet Bjornson.

"Safety of staff and community members at Tipinawaw is always top priority. We continuously review and adapt our protocols to keep everyone safe. The frontline workers at Tipinawaw work with folks who face some of the highest barriers in the system whether it be mental health or addictions. Staff are required to attend de-escalation, mental health & overdose prevention training. If there are concerns, we will continue to address them as needed"