Proposed Nordic Spa to be built near Fort Edmonton Park

The Nordic Spa wants to build in a wooded overflow parking lot area next to Fort Edmonton Park, according to a City of Edmonton report.

It also includes an image of what the year-round spa would look like. 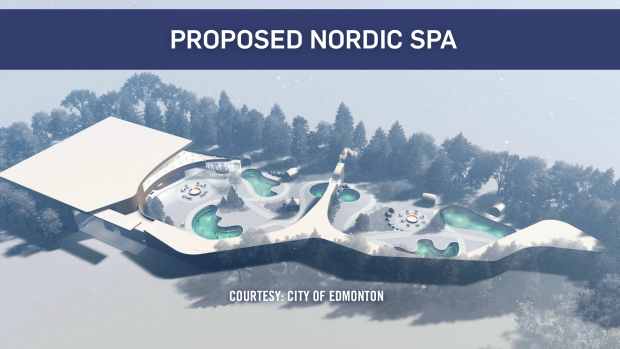 The man behind the project, Hank Van Weeldon, has told CTV News Edmonton that it would cost $20 Million to build and be open by 2020.

The spa would feature several hot and cold pools and have food and beverage options.

“What’s really exciting about the Nordic Spa is that it’s year round, but it’s heavily utilized in the winter and that’s a time when we don’t have a lot of activity in the park," said Darren Dalgleish, the president of FEMCO—the park's company.

Customers would be required to be 18 years or older and admission would be about $70 per day.

The Fort Edmonton Management Company (FEMCO) supports the report and said it would lease the land from the city, then sub-lease it to Nordic Spa.

The report will go before council's executive committee next week, but Mayor Don Iveson has already said he liked the idea.

“I think it could be a very good complement to our intention to year round activate the park, support the hotel, bring more tourist to the park and to the river valley.

“I think there could be a win-win here and I’m very interested to explore it at committee next week.”