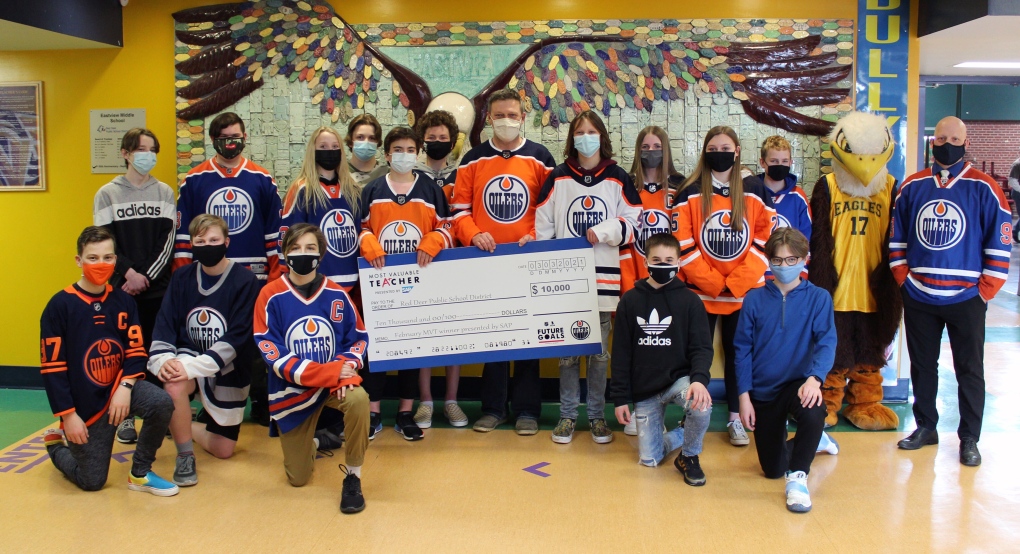 Jeremy Spink won the NHL/NHLPA Most Valuable Teacher for the month of February.

RED DEER -- A Red Deer teacher has won the NHL/NHLPA Most Valuable Teacher for the month of February. Eastview Middle School teacher Jeremy Spink was one of 20 teachers from across North America up for the award.

Last Thursday, he found out he had won the award, along with a personalized Oilers jersey and a $10,000 technology grant provided by NHL partner SAP for his school.

“I want to say thank you so much to the whole community,” Spink said.

It was amazing to see the community rally and help us win.”

Spink said he was overwhelmed by the support he received from former students.

“There were lots of positive comments from kids I didn’t even know I had an impact on,” he said.

“It just goes to show that everyday you can make an impact on a kid and that’s the most important part of the job.”

Spink is now in the running as a finalist for the Future Goals Most Valuable Teacher of the Year. If he wins, he will receive an additional $20,000 for Eastview Middle School and a $1,000 towards a personal technology device to improve the virtual classroom experience. The winner will be announced in May following another round of voting.

Spink has incorporated the Future Goals - Hockey Scholar program into his classroom. The program is designed to leverage STEM (science, technology, engineering, and math) in hockey to create a fun and memorable learning experience.

“It is a great program and it all ties right into our curricular goals,” he said.

“I am dedicated to teaching applications for STEM because I know that it not only impacts how healthy and productive students are during this time, but also their well-being and success far beyond the K-12 years.”

“I am so happy for Mr. Spink that he has been recognized for the work he does in our school. He has had such a positive impact on so many students who are currently at Eastview and who have had him as a teacher or a coach in the past,” said Robertson.

“One of the things that I have most appreciated is hearing about the countless past students who have reached out to Mr. Spink as a result of this to thank him for making a difference and for being such a positive role model for them. It is a pretty exciting day for Eastview.”