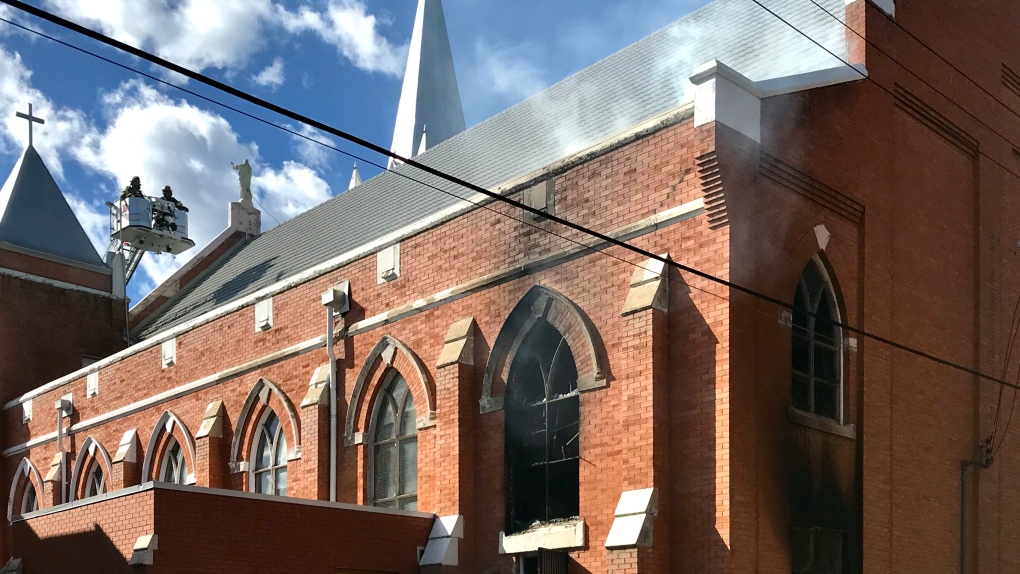 Firefighters arrived at the Sacred Heart Church Of The First Peoples on 96 Street and 108 Avenue at 2:15 p.m., to find flames on the back corner and roof of the building.

“At 2:15 I just came running out..I was surprised to see the huge fire and smoke,” Pastor Susai Jesu said.

Jesu was eating his lunch next door when the blaze broke out. He let firefighters in the front of the church, and said it appeared the storage room was on fire.

“Very, very hard (to watch). I’m just taking the name of Jesus every minute. That’s all I can do at this time. Help us put out this fire,” Jesu told reporters while smoke still poured out of the church behind him.

Jesu didn’t know how the fire started, but said the building was empty at the time.

Edmonton Fire Rescue Services confirmed no one was injured in the blaze or during the firefight, and the flames were declared “under control” at 5:17 p.m.

The church was built in 1913, and served as a gathering place for mass and community outreach, including many Christmas dinners for the homeless.

“For decades this has been the Catholic gathering place for Indigenous peoples. This has been designated especially for them,” Richard Smith, Archbishop of Edmonton said at the scene. “Their hearts will be crushed. This is a sad, dark day for all of us. But certainly for the parishioners.”

Smith pointed out the church was previously rebuilt after a fire destroyed a large part of the building in 1966. The Archbishop promised to do the same in 2020.

“This church is just too, too important in so many ways. We’ll do what we need to do to restore it,” Smith said, adding the building was insured.