An Edmonton pub server needed 14 stitches on her face following a fight with a customer.

The incident, captured on a security camera, happened during closing hour at Crown & Anchor Pub & Grill in north Edmonton on Saturday night.

“And it all started over a stupid mask.”

Shaw said her injury -- a deep vertical cut between the eyes -- was the result of escalating tensions that began when a woman was asked to wear a mask while walking around the pub.

After arguing with employees and a fellow customer, the woman put a mask on, according to Shaw.

But things didn’t end there.

Surveillance video shows the masked female patron and Shaw exchanging words several feet away from the patron’s table. According to Shaw, whose family owns the pub, the security's timestamp is off several hours. 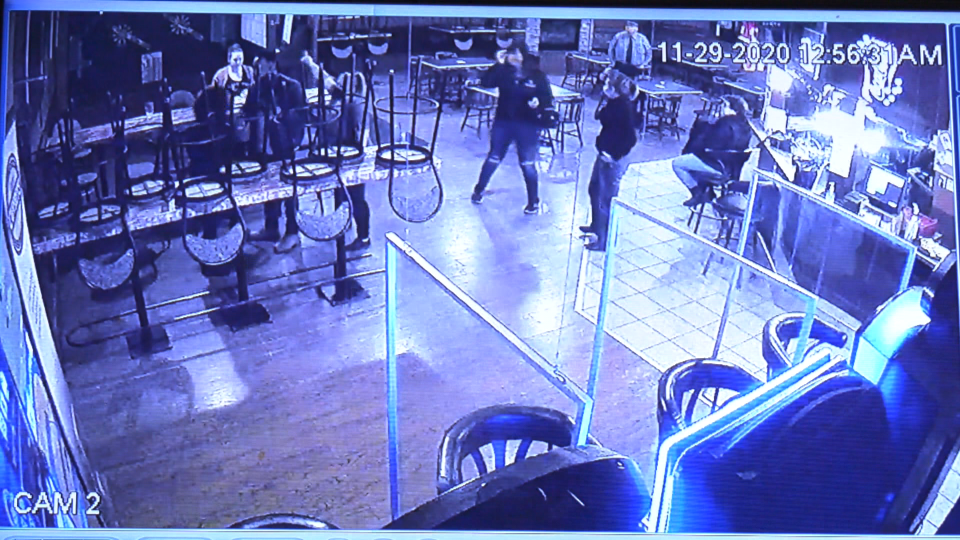 Minutes later, Shaw can then be seen standing in the middle of the bar, directing her attention towards the table the female is at and motioning towards the exit. The female patron then approaches Shaw, who also takes a couple steps forward.

The argument then turns physical.

“She stood on her tippy toes and got right in my face and I pushed her back and I said, ‘Please do not touch me. You need to leave. Have a good night. You are not welcome,'” recounted Shaw.

“But she came up and went right for my throat. When her hands touched me like this,” said Shaw, gesturing with her own hand around her throat, “I said, ‘Do not effing touch me,' pushed her back into the corner and said, ‘You need to leave.’”

Video shows a struggle between the two. Shaw said it was during the struggle when the woman grabbed a glass and smashed it against her face. Shaw then threw the woman to the ground.

“I didn’t notice until after she got up and ran out that I was bleeding,” said Shaw, who proceeded to seek medical attention for the cut. 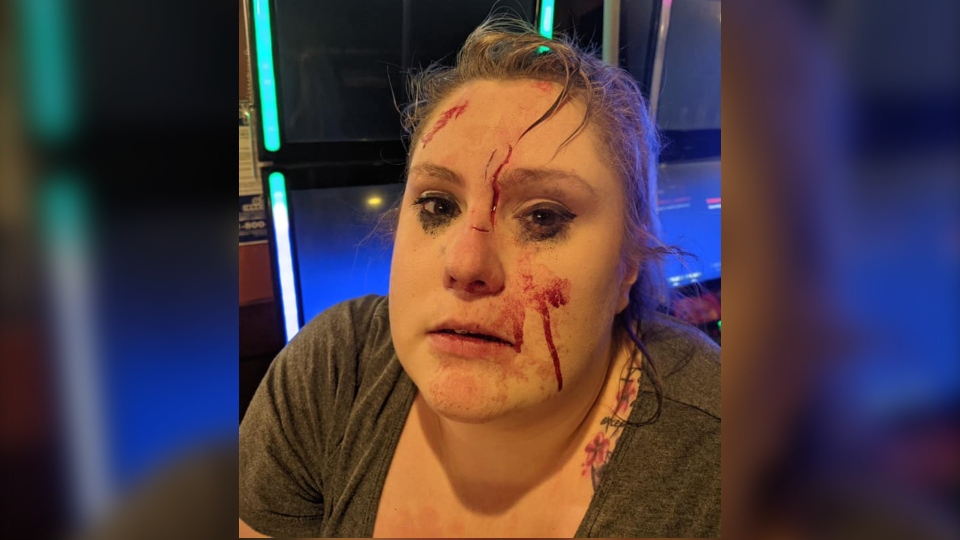 “I wanted people to know this is happening and I wanted the government to take note of it and make sure that the workers who are working are safe,” said Shaw.

Edmonton police are investigating the incident and have obtained the same surveillance video shown to CTV News Edmonton.

“It's an assault causing bodily harm charge, at the minimum,” he said.

'IT ALL STARTED OVER A STUPID MASK'

Less than an hour before the glass incident, the same female tried repeatedly in vain to order alcohol after Alberta's 10 p.m. cutoff, according to Shaw, who said the female got up from her table and approached a coworker at the bar without a mask.

The coworker told the woman she needed to wear a mask but the woman claimed she did not have one.

“I heard this and I said, ‘Yes, you do, hon. I gave you a mask when you came in,’” said Shaw, adding the woman first entered the pub shortly after last call and was not served any alcohol.

In Edmonton, it is mandatory to wear masks in restaurants and pubs unless eating or drinking in a designated seating area.

A different customer then openly questioned how a person could not know the mask regulations. Shaw said that prompted the woman to approach and begin yelling at that customer.

“She got into a regular’s face, calling her the b-word and the c-word and all this and saying how she’s a young Black woman with rights.”

That is when Shaw intervened. A verbal exchange ensued during which Shaw said the female accused her of being racist.

“No one brought up race but her.”

CTV News Edmonton was not shown video of that exchange.

The woman continued to cause disruption from her table, Shaw said, until the group was reminded they would need to leave by 11 p.m., as per provincial health restrictions.

“I was like, ‘You need to leave. Have a good night. These are the laws.' And her friends even said the same thing.”

Before the fight, the woman’s friends can be seen trying to calm her down and talking with staff.

Despite her injury, Shaw is already back at work, but said she is experiencing headaches. 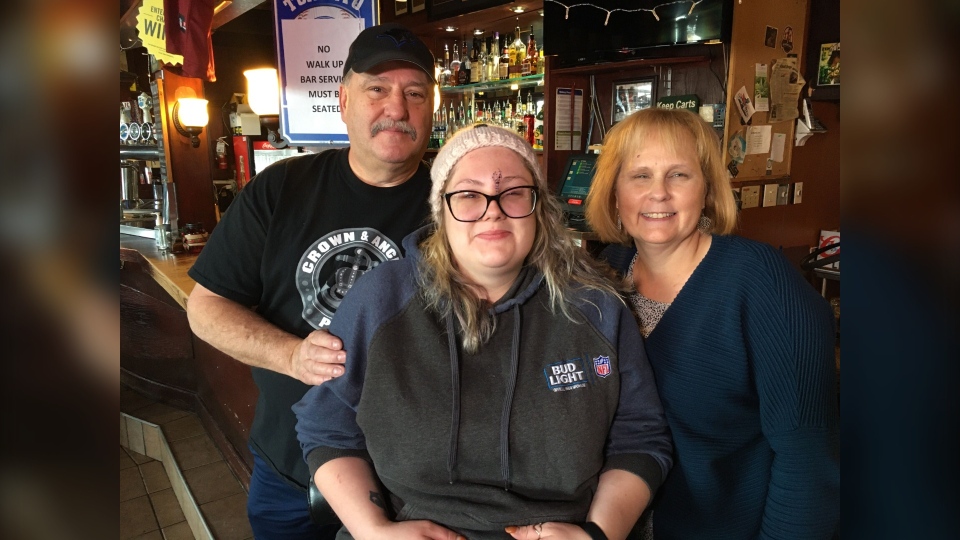 “I’ve had people saying my guardian angels were there,” said Shaw, wiping away tears and wincing.

“She didn’t break my nose, she didn’t give me a concussion, and she didn’t hurt my eye.”

“If the government wants me to keep policing people still and doing this, then they’re going to need to start paying me.” said Shaw.

There have been other incidents in Edmonton where customers have become unruly when asked to abide by the city’s mask bylaw, but few, if any, have resulted in violence, according to EPS.

“I think this is the first situation where somebody has resorted to violence,” said Pattison.