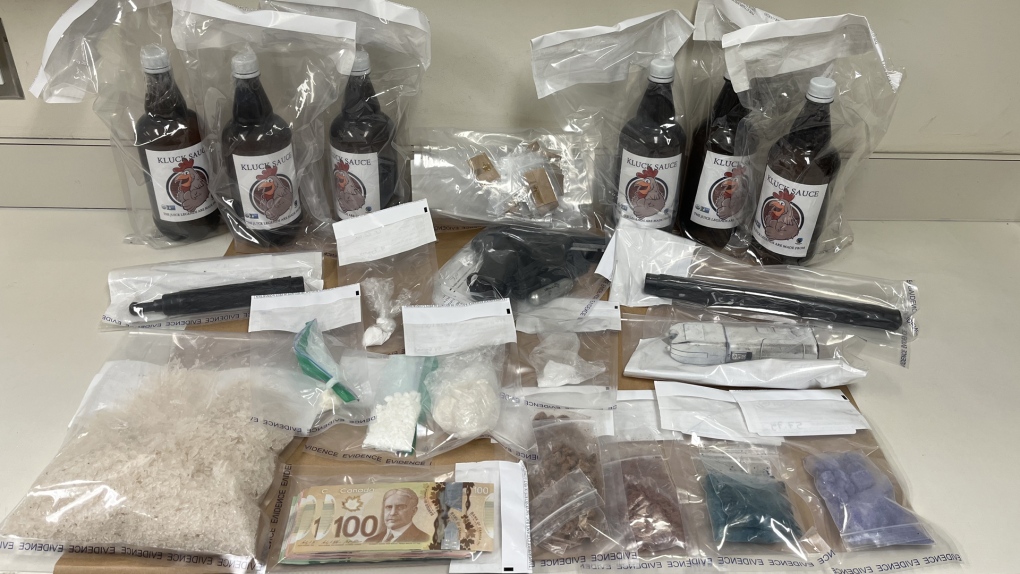 Police seized a large quantity of drugs from a property in Strathcona County. (Supplied: RCMP)

A Sherwood Park man has been charged after the seizure of a large amount of drugs.

Mounties were performing a curfew check on a man in Strathcona County around 1:34 a.m. on Aug. 6.

The man wasn’t home, which police say was a breach of his curfew conditions from a stolen property charge in June.

A short time later, the man arrived home on a motorcycle and was arrested without incident.

Police searched the motorcycle and found what is believed to be three litres of GHB, 754.8 grams of methamphetamine, 71.2 grams of cocaine, and 20 oxycodone pills.

Later that day, police executed a search warrant on a property at Township Road 515 and Range Road 232 in Sherwood Park.

They seized what is believed to be 266.5 grams of fentanyl, three litres of GHB, 26 pouches of resin, a stolen 2013 Lincoln MKX and a Taser.

Craig Coffey, 46, of Sherwood Park has been charged with three counts of possession for the purpose of trafficking, possession of a controlled substance, obstruction, and two counts of failure to comply.

He remains in custody and will appear in Sherwood Park Provincial Court on Aug. 24.

Eric Weinberg, an executive producer and writer for the hit TV show 'Scrubs' and many others, has been charged with sexually assaulting five women that he lured to photo shoots and there could be many more victims, Los Angeles County prosecutors announced Wednesday.

A dating app for Conservatives is now live, and already facing backlash

“No democrats!” multiple women say when asked what they're looking for in an advertisement for the Right Stuff, a dating app for Conservatives backed by Paypal co-founder Peter Thiel, which launched in the U.S. last week.

Hockey Quebec says it has lost confidence in Hockey Canada and will not transfer funds to the national organization. The provincial federation confirmed that its board of directors adopted a motion Tuesday night saying it does not believe Hockey Canada's current structure can change hockey culture.