A 19-year-old man is in police custody after a shooting near Rogers Place after an Edmonton Oilers viewing party ended Thursday evening.

According to Edmonton police, officers conducting traffic control responded to a shooting at 11:15 p.m. near 103 Street and 103 Avenue — just south of the Ice District Plaza.

The officers witnessed a man discharge a firearm "multiple times" at an unidentified male, police said. Two other males attempted to flee the area on foot, but police detained them a block away.

What appeared to be a silver revolver was recovered by police from one person involved in the shooting, as well as ammunition and drugs. That gun was determined to be stolen, investigators say. 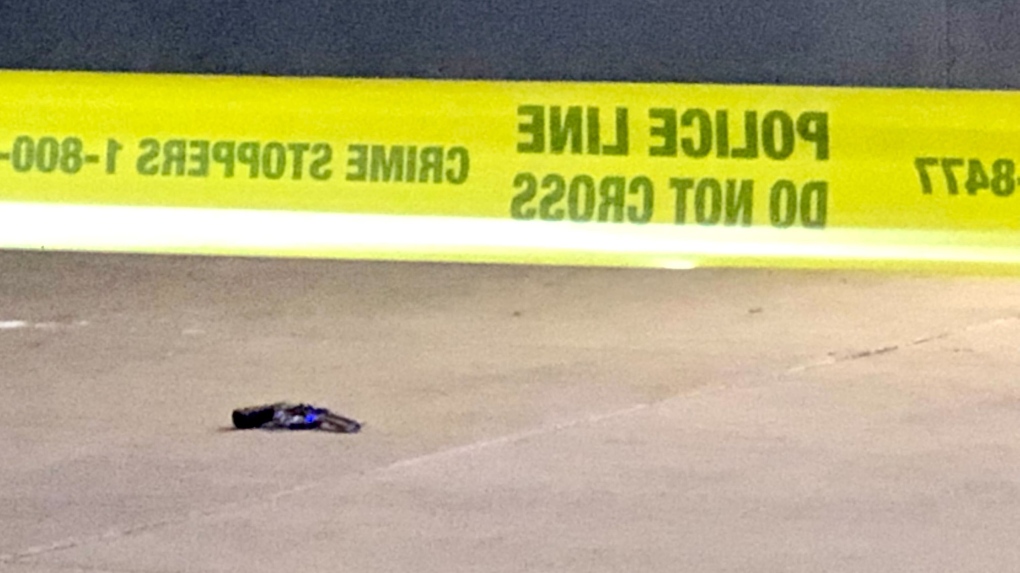 What appears to be a silver revolver was recovered from one of the males involved in the Thursday night shooting near the Ice District Plaza (CTV News Edmonton/John Hanson).

One male has been released without charges, police say, while a 19-year-old remains in custody and faces "multiple charges."

No injuries were reported to police.

"This event is not believed to be linked to the hockey game," the Edmonton Police Service said in a statement. "Officers continue to search for the unidentified male thought to be the target of the shooting.

No further information was available from police.

Jason Parent, a witness at the scene, said that he was about to leave the Crash Hotel when he heard the incident.

"I heard multiple shots, probably four or five," Parent said. "I looked at my wife, we looked at each other, panicking whether to go outside or not."

Another bystander CTV News Edmonton interviewed, was waiting for the red light to change when they saw the incident.

"Two people run away right in front of me," they said. "And then just shot it — ta ta ta ta ta.

"And then they run away, and then police behind them follow them."

The Crown is seeking to revoke bail for Tamara Lich, a leader of the "Freedom Convoy," after she appeared alongside a fellow organizer in an alleged breach of her conditions.

The gunman who attacked an Independence Day parade in suburban Chicago fired more than 70 rounds with an AR-15-style gun that killed at least six people, then evaded initial capture by dressing as a woman and blending into the fleeing crowd, police said Tuesday.