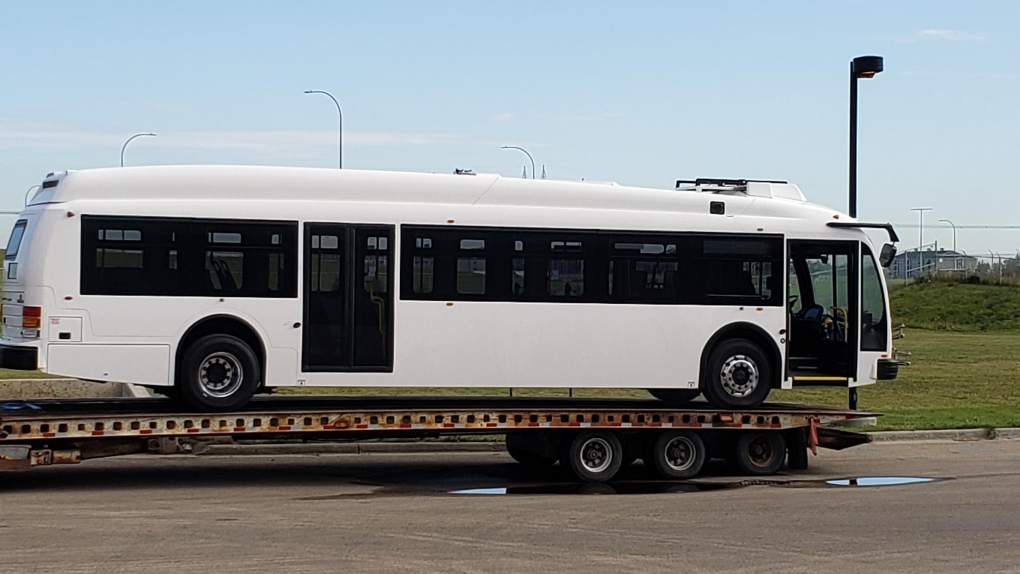 A picture of one of the city's first new "test" electric buses was posted to Reddit Wednesday. The buses aren't expected to go into service until mid-2020. (Reddit)

One of the first new electric buses to join the Edmonton Transit fleet has been spotted in the city, but don’t expect it to go into service anytime soon.

A picture of the sleek, white bus on a flatbed truck in Edmonton’s west end was posted to Reddit on Wednesday.

The City of Edmonton confirmed it was one of two electric buses supplied by California-based Proterra, with both being used to test infrastructure and charging stations.

The buses have a range of up to 400 kilometres, are winter compatible and take between one to four hours to recharge.

The city says they emit 40 per cent fewer emissions than the most recent diesel buses used by the Edmonton Transit Service. ETS says the electric buses will also produce zero tailpipe emissions.

Proterra will provide around 40 additional electric buses to the city that are expected to go into regular service in 2020 and 10 more in 2021.

The electric transit buses were purchased with $43.1 million provided last year by the municipal, provincial and federal governments.

Part of the $43.1 million put up for the new buses will also go toward a charging station and infrastructure at Kathleen Andrews Transit Garage and Centennial Garage.

Some Reddditors said they were happy to finally see the buses come to town.

"I am so excited for this. Quieter and no emissions emitted. Hopefully it is reasonably cost effective," one person wrote.

"Too bad it will still be 45 mins late and smell like urine and cigarette," said another.

Before the buses go into service, the city says training will be provided to bus drivers, ETS inspectors, superintendents, instructors, fleet and facility staff as well as first responders.