EDMONTON -- In Day 6 of the Abdulahi Sharif trial, the crown showed Edmonton police helicopter video with the moments leading up to the U-Haul takedown downtown.

Sharif is accused of hitting Const. Mike Chernyk with a car and stabbing him multiple times before driving a U-Haul truck through downtown Edmonton and striking and injuring four people on Sept. 30, 2017.

No one died, and Sharif is facing 11 charges, including five counts of attempted murder.

On Wednesday, video from the Edmonton Police Service (EPS) Air 2 showed the moments before and after the U-Haul takedown.

"Use all means necessary to stop that vehicle and end this complaint."

Seconds later, the U-Haul is seen on its side in the area of 107 Street and Jasper Avenue. 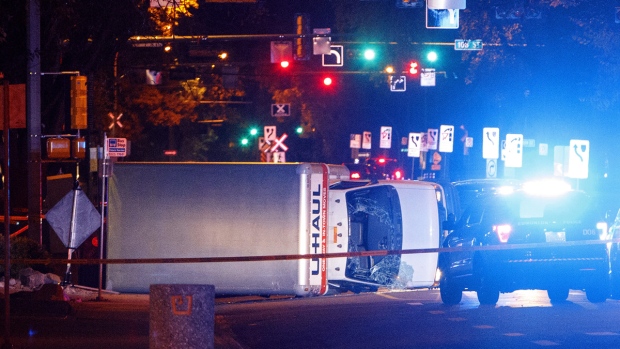 On Monday, a police officer placed in a cell with Sharif that night testified Sharif told him "he hit three to five people with the U-Haul truck when he was trying to get away."

Abdulahi plead not guilty to all charges.

The first two pedestrians were outside The Pint on 109 Street.

In court, the first person struck said, "I was kind of launched towards The Pint." After he landed, he said, "That's when I saw him strike the other fellow."

The second victim told court he couldn't remember being hit, and was "in quite a bit of pain" when he woke up in hospital.