Stuff-A-Bus campaign helping food bank get through the holidays

Stuff-A-Bus campaign helping food bank get through the holidays 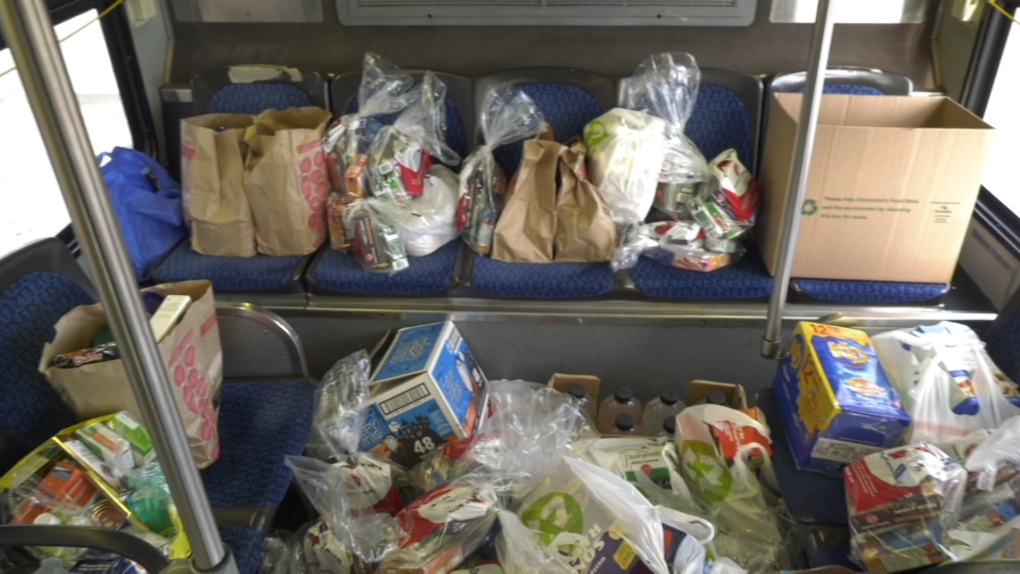 The annual Stuff-A-Bus campaign is running this weekend, collecting food and monetary donations for the Edmonton Food Bank.

As the festive season begins, the food bank is counting on this fundraiser to help see them through a busy time of year.

The campaign started on Nov. 23, with peace officers collecting donations to fill their cruisers.

On Saturday, ETS buses were parked outside every Save-On-Foods store in Edmonton, trying to collect enough food to fill the buses.

"We're doing this because any city, of any size, depends on empathy and helping one another out, so this is why we're happy to support Edmonton's food bank," said Peter Haight, a customer engagement associate with Edmonton Transit.

"The need for donations never goes away. Hunger is always there… hunger never takes a holiday so that's why it's important for us to keep doing this campaign year after year."

On average, the Edmonton Food Bank is serving just over 30,000 people a month currently, according to a spokesperson.

"That is more than the equivalent population of Leduc just through one program, that's the hamper program that is serving individuals and families within our community," said Tamisan Bencz-Knight, with the food bank.

"Somebody might think, 'Oh, it's only one can of beans, or one jar of peanut butter,' but when you pool that together with all the stores, all the donations, everybody giving what they can, it fills a bus and that's what's important."

The food bank also provides meals and snacks to over 300 different organizations like soup kitchens, shelters and schools.

"We are the first to feel the economic pinch and we will be the last to recover," said Bencz-Knight.

"When people have to make decisions (between) paying the rent or feeding their children and they're coming to the food bank to make those decisions… that's hard, that should not be happening."

Traditionally, the Stuff-A-Bus campaign is a large fundraiser, bringing in around 20,000 kg of food. Monetary donations are also important to the food bank, which is expecting to have spent $3 million on food purchases for 2022 alone by the end of the year.

Currently, the Edmonton Food Bank is seeing food leave the warehouse faster than donations can come in, which is where the monetary donations help fill the gap.

"I'm just happy that people are giving at this time, because I know there are challenges with inflation, I know even myself going to grocery stores, I'm making different decisions with my own personal purchases. We're all being impacted by this."

On Sunday, donations are being collected at the Clareview LRT station, food can be dropped off at the festively-decorated LRT car. Save-On-Foods is still collecting cash and food donations, money can also be donated through the food bank's website or by texting FEEDYEG to 20222.

For people looking for other ways to donate, the food bank is also looking for volunteers.