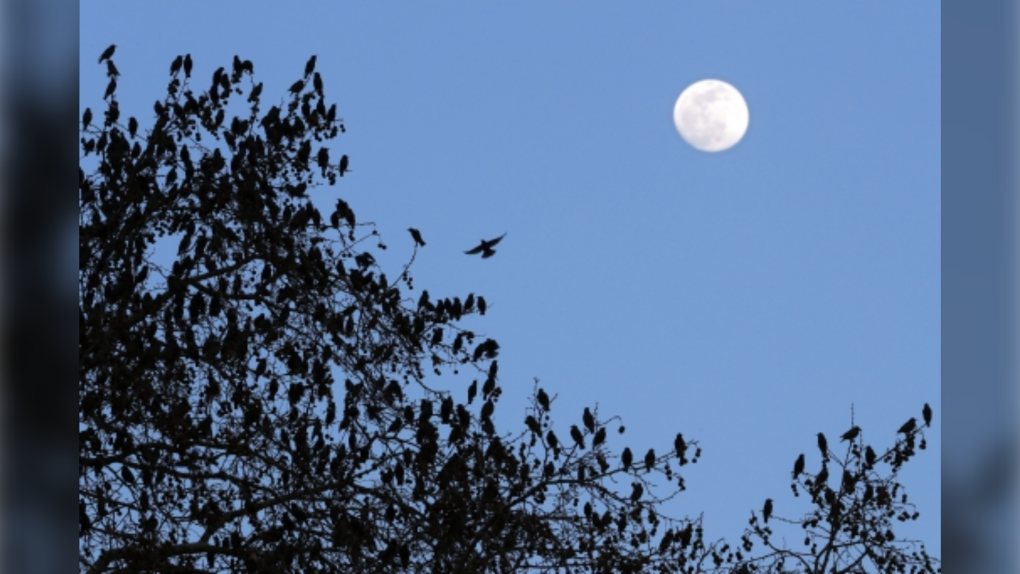 A flock of birds gathers on a tree as night falls in Lisbon, Friday, Feb. 7, 2020. There may be many, many more songbirds in Alberta forests than previously thought, say University of Alberta scientists who have come up with a new way of counting them. THE CANADIAN PRESS/AP/Armando Franca.

EDMONTON -- There may be many, many more songbirds in Alberta forests than previously thought, say University of Alberta scientists who have come up with a new way of counting them.

But researchers say that while the new counts may be good news - some estimates are more than 10 times higher - they don't change the overall declining trend of the province's boreal songbirds.

“Our estimates just highlight that our understanding is incomplete,” said Peter Solymos, whose paper was recently published in The Condor, the journal of the American Ornithological Society. “We need to understand the limitations.”

Bird populations across the continent have been in decline for years. A paper last fall estimated populations have dropped by three billion overall since the 1970s.

Numbers have been estimated for years using data from the Breeding Bird Survey, which uses a standard, consistent method across North America.

Solymos said that survey uses assumptions and techniques that may distort Alberta results. It sends counters out along prescribed roads, stopping at regular distances and counting birds heard and seen within a certain time. Those raw numbers are adjusted to account for factors such as birds singing more at some times of day than others.

Solymos said that may work in southern Alberta and the United States, where roads go almost everywhere. But northern Alberta is full of roadless bush. Roadside counts bias results in favour of roadside habitat.

“Roads are usually built in upland environments and go through upland vegetation. (As well), you get the disturbed habitat along the road.

“You get a non-random sample. You have to go into the bush.”

Solymos took the bird survey data and combined it with dozens of off-road bird surveys done over the years for forestry companies and agencies such as the Alberta Biodiversity Monitoring Institute.

Out of 81 bird species, Solymos came up with significantly higher estimates for 45 of them. Four species - crows, goldfinches and two types of sparrow - came in lower, and the rest were comparable.

Solymos came up with populations estimates that are, on average, 3.7 times higher.

“It may show that there are more birds in the intact boreal than we thought, which is good news. It means we still have lots of chances to keep them that way.”

“Large, intact areas are really important to maintaining abundance,” he said. “Birds clearly are negatively impacted when you start putting in roads.”

Both scientists agree the recount changes nothing about the trends in bird populations or the threatened status of some.

Solymos said his methods are just the latest in a long effort to refine what are always going to be only estimates.

“It just highlights we need to be careful when using these crude approximations.”

“There are maybe more (birds) than we estimated, but it changes nothing about the overall point of what we need to do for conservation.”

This report by The Canadian Press was first published June 21, 2020