EDMONTON -- An Alberta man wants answers after his family's pet pot-bellied pig was shot just metres from his home, then butchered and dumped in a nearby area.

Tex Schar, who lives on a rural property in Mayerthorpe, said his wife was home when she heard a gunshot around 10:45 a.m. on Sunday.

He arrived home at noon and went to feed their animals when he noticed his pot-bellied pig, Earl, wasn't in his pen.

"He's a free-roaming pig," he said. "He always greets you. Whenever you pull up he's right there."

Schar couldn't find Earl and eventually came upon a bloody patch near a horse pen.

"You could see some fresh tracks where somebody had pulled up. Looks like they skidded up to him, and they must've shot right out the window of the vehicle," he said. 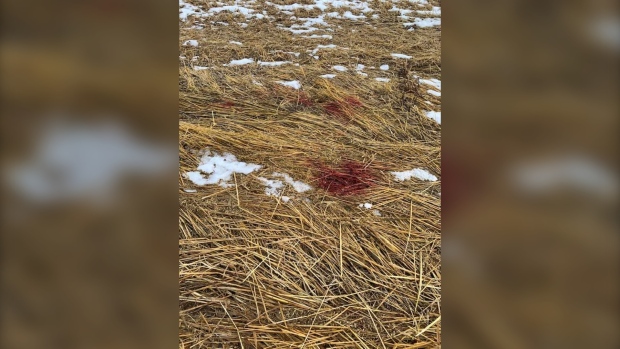 He reported the shot fired to RCMP and posted on Facebook asking friends if they knew anything.

One neighbour told him he saw a blue truck parked across the road leading to Schar's home around the time the shot was fired. He said the occupants appeared to be a man and his young son.

Another neighbour contacted the couple Monday to say they found pig remains about four or five kilometres from Schar's home.

"It was him. What they had done was they gutted him, took the meat, cut his head off and scalped him, so they took his ears and scalp," said Schar.

The beloved pet's death has devastated the family.

"He had a skin condition when he was young, we just about lost him because he had a fever," Schar said. "Then he made it through. That was our miracle pig."

Mayerthorpe RCMP confirmed they were investigating the reported shooting.

"Very few details for us to go on but we are still investigating it," said Cpl. Greg Anderson, adding it's illegal to hunt on private property without permission or discharge a firearm within 200 yards of occupied buildings.

The shooting may have been a case of mistaken identity, he said.

"We do have a large population of wild boars in the area and there's actually, for a while, there was a bounty on the wild board to try to decrease the population."

Lac Ste. Anne County introduced a Wild Boar Eradication Program in 2013 to reduce the population. While it was in effect, hunters received $50 per pair of wild boar ears.

Schar said the shooter may have been confused, but it means they wouldn't have known much about boars.

"The possibility is they thought it was a wild boar, but if you look at a picture of a wild boar and a pot-bellied pig there's a definite difference," he said.