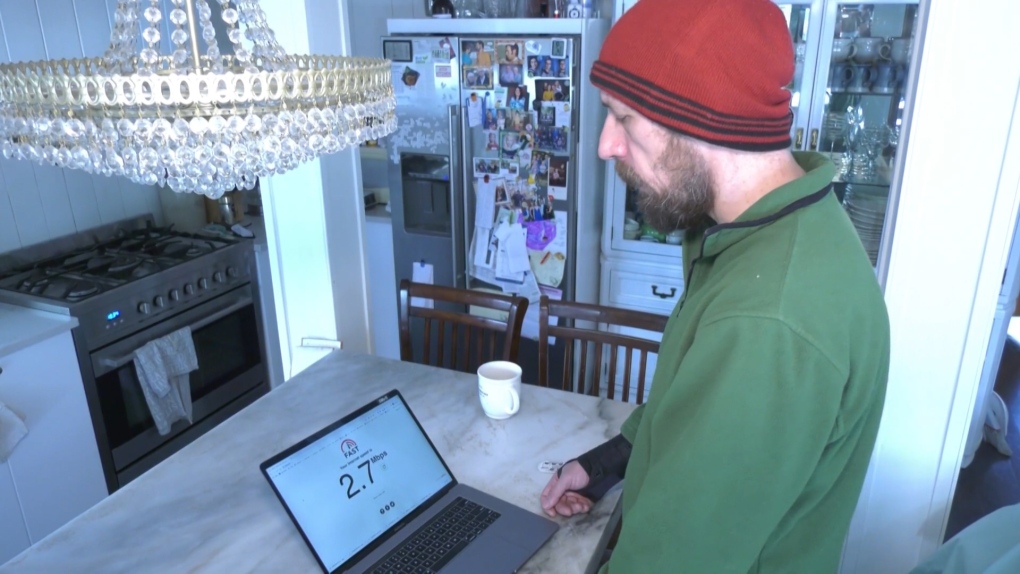 Rudy Zacharias said slow and glitchy internet on his property is the norm.

EDMONTON -- It's a tale of two very different internet providers.

Rudy Zacharias is a Telus Hub customer which uses the LTE network to connect people living in remote areas to the internet.

"The speed here is atrocious," said Zacharias, saying his connection is less than on megabit per second (mbps).

He said the service worked well for the first three months he started using it.

"Then they overcrowded the tower, that’s what they told me anyway and they have no plans to enhance that tower anytime soon," he said.

While 1,000 feet away, on the same Parkland County acreage Michelle Holland is enjoying a faster, more reliable internet connection.

"A huge difference," she said.

"Even though it's beta we are getting speeds on average anywhere between 50 to 100 mbps so significantly more and it's close to what people would be getting in the city with fibre optic," said Holland.

It uses satellites to provide internet connections to remote locations.

"And we know that it’s just going to get better and better from here that we aren't going to have these issues anymore it’s a huge relief," she said.

Like her neighbour Zacharias often does now, Holland has have to leave home just to access the internet.

"It's our main connection and having to go to a Starbucks or go to our parents house just to get an internet connection seems a little absurd in this day and age," she said.

Parkland County's mayor said the pandemic has brought the problem to the forefront.

"We’re recognizing that the service that our residents are providing just isn’t adequate. They're not satisfied," said Rod Shaigec.

"To get the speed and capacity that many of our residents are looking for we need to implement fibre optic service so that is what we are focusing now on in Parkland County," he added.

Shaigec said the county has invested $7 million over the past decade on broadband initiatives. Fibre is being installed in the hamlet of Entwistle and is expected to go online within the next month.

"Our administration is currently doing an assessment and review of where the next areas where fibre would be installed," said Shaigec.

“That’s our goal and hopefully both the federal and provincial governments will recognize the need and make significant investments across the province and across this country,” he said.

“Whether it’s business or government or whoever needs to make it happen in this day and age, it’s a fundamental right to be connected,” said Zacharias.

"We understand there's limitations when we live in the country, I'm not expecting speeds of 200 or anything like that but at least make it workable so we can connect to the outside world."

Fed up, Zacharias hopes to get connected to Starlink when it becomes available to everyone later this year. The equipment costs $649 – then $129 each month for the service. A price Zacharias said he can’t afford not to pay.

"We're just waiting for ours to arrive and unfortunately there's a high cost to it and we don't have an option in today's world. We need to be connected."

"We paid the price for it but you have to cough it up if you want to basically make a living out here," said Holland.